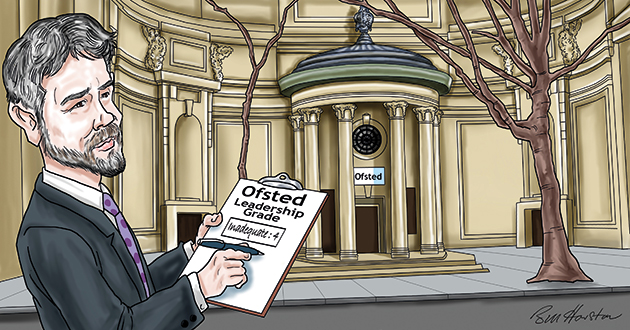 Ofsted has called off its investigation into an inspector who demanded the immediate departure of his boss Sir Michael Wilshaw — after FE Week readers jumped to his defence.

The chief inspector caused widespread anger across the sector when he told the Commons Education Select Committee on March 2 that 16-to-19-year-olds should be taught in schools rather than colleges, because FE was “in a mess”.

It wasn’t just college leaders offended by Sir Michael’s remarks — one Ofsted inspector, Tony Davis, told a recent NewBubbles Leading Aspiration FE Conference that Mr Wilshaw should be removed from his post before his planned retirement in December due to the upset he caused.

His comments prompted Ofsted to launch an investigation into whether he had breached his contract when he spoke out a month later, on April 18.

However, the inspectorate has now confirmed to FE Week that it has sensationally dropped this investigation with “no further action required” less than two weeks later, right after we emailed a long list of comments posted on our website backing Mr Davis and requested a response.

Mr Davis, who has added to his criticism Mr Wilshaw in a comment piece, told FE Week: “I am delighted Ofsted will be allowing me to continue my work as an inspector.

“However, along with many other people in our sector, I cannot accept that Sir Michael should be allowed without significant challenge to give unfounded and biased personal opinions when he is speaking to government in his capacity as chief inspector.

“I am very pleased to see the strength of opposition from so many quarters to his views.”

The Ofsted spokesperson admitted that the inspectorate dropped the investigation on April 27.

He said: “We have reviewed the circumstances and concluded that no further action is required.

“Everyone is entitled to their own opinion, including Sir Michael, who was expressing a personal view, as he made clear at the Education Select Committee.”

The FE Week reader comments sent to Ofsted were strident in their criticism of the chief inspector. One, submitted by Andrew Morris, said: “At last a person is brave enough to speak plainly about the damage his powerful boss done to a great part of the UK education system.

“Quite apart from the chief inspector’s abuse of professionals and students in the FE system, his crude remarks have fuelled prejudice and ignorance more generally by placing personal anecdote above clear evidence. Congratulations Tony Davis!”

Mark Hill wrote: “It seems to me the wrong person is being investigated by Ofsted.

“If there is anyone that’s brought it into disrepute and abused their status and role with unsubstantiated comments I think an objective investigation might conclude it’s not Mr Davis.”

Another reader, going by the name Louise, said: “Thankfully there are still people like Tony Davis who have the honesty and conviction to do the right thing. Thank you for sticking your neck out, many people shy away from standing up for what is right and just. Well done Tony!”

As an employer myself, it was a surprise to learn that Ofsted had decided not to take any action against one of its own employees for vehemently criticising Sir Michael Wilshaw.

But on reflection, Wilshaw’s outspoken criticism of the sector has created an unprecedented situation.

He brought Ofsted into disrepute as a witness to the education select committee, expressing personal views that did not reflect the position of the important organisation he leads.

Ofsted said in its statement, explaining why it had dropped the investigation against Mr Davis, that everyone is entitled to their own opinion.

I don’t think that can ever really apply though to the leader of the national inspectorate — who should always bear in mind the importance of maintaining its credibility with all of the education sectors.

It is little wonder then that inspectors who represent him on the front line feel let down, and Mr Davis was speaking up for them.

Mr Davis writes with a great deal of authority on page 14, and has shown a huge amount of guts by speaking out.

And given the special circumstances, Ofsted should also be congratulated for backing away from disciplining him.