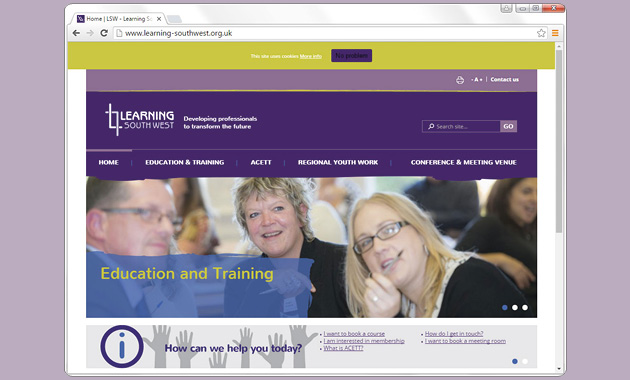 Two providers have been forced to step in to support students after a training and education charity went into administration due to funding difficulties.

Learning South West, which worked with leaders and practitioners in both youth and education and training organisations, was based in Taunton, Somerset.

A spokesperson for accountancy firm Mazars said Tim Ball, partner at its Bristol office, had been appointed joint administrator for the charity on April 11.

He added the charity, which had an annual income of around £2.5m, had 10 employees of which “the majority have been made redundant”.

But there was hope for some of the learners, after Wiltshire-based charity The Learning Curve and National Star College, in Cheltenham, confirmed they were making alternative arrangements.

The Learning Curve, which provides training and development to the voluntary sector and wider community, secured Learning South West as a subcontractor for 2015/2016 to deliver level three apprenticeships in youth work.

But a spokesperson told FE Week on April 20: “We have two apprentices who were supported by Learning South West and we are making alternative arrangements which will allow them to finish their qualifications without being affected.

“Our contract with them [Learning South West] had only been in place for a couple of years”.

The college had been involved in running level five specialist diplomas for nine existing teachers on behalf of Learning South West.

After learning of its demise, National Star announced it would continue teaching the diploma to the learners affected and had arranged an alternative venue at its own site for training.

“We received no advanced notice that this was going to happen,” said David Finch, National Star director.

“The course is on teaching learners with disabilities and we felt it was important for these teachers to complete the training.

“National Star took the decision that it would continue to run the diploma at our own cost.”

Learning South West had previously contacted the nine learners to tell them that the diploma would be stopped.

One of the students, Angela Braysher, who teaches at Kingston Maurward College in Dorset, spoke of her relief that National Star had stepped in.

“I was disappointed I was when I heard the news as I had just completed my first assignment and thought it was going to have been a waste of time,” she said.

Kate Howard, chair of trustees at Learning South West, made a statement on its closure.

She said: “Our unhappiness is compounded as young people and adult learners are the ultimate beneficiaries of our work.

“We are aware this is a major loss to the FE and skills sector and vital youth support services.”

Mr Ball, from Mazars, said: “The charity, which operated in partnership with various government and national agencies, has faced significant uncertainty with its future funding, leading to the board of trustees reaching this very difficult decision.”

The SFA declined to comment on the demise of Learning South West.

However, a spokesperson confirmed that it had not been a lead provider with an SFA contract since 2010/2011.