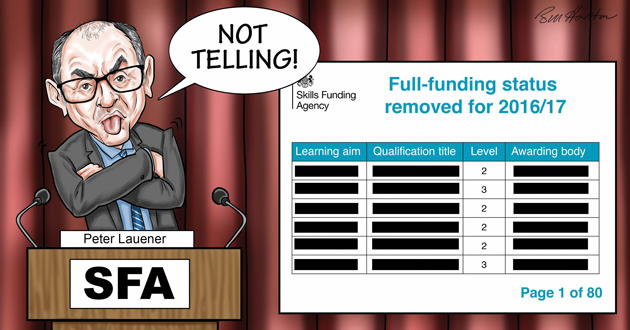 A college strategic funding manager has hit out at the Skills Funding Agency (SFA) for refusing to publish a list of which qualifications have lost full funding through a widely-criticised consultation.

The review, which ran from February 10 to 29, requested views on plans to end full-funding ‘core’ entitlement for up to 524 full level two and three qualifications offered by 56 awarding organisations for 19 to 23-year-olds.

FE Week last month reported fierce criticism of the consultation’s timing from NCFE and the Federation of Awarding Bodies, because five of the 14 working days it was open fell over half-term.

The SFA subsequently revealed that only 33 of the 524 qualifications remained eligible for entitlement funding as a result of this, because they “evidenced demand, local need and entry to highly specialised job role/occupation, or the qualification serves as a prerequisite to a specialised job/occupation”.

But it refused to provide a list of the remaining 491 potentially losing entitlement to full funding status despite repeated requests from FE Week, which provoked a bemused response from Morley College’s strategic funding and examinations manager, Stephen Hewitt.

He said: “It is ridiculous that the SFA won’t publish a list of the over 400 qualifications that they have decided should be stripped of full funding status.

“We need this information to plan for 2016/17 and, by not telling providers, Peter Lauener and his agency are making this much more difficult.”

She added: “Of the 63 qualifications where we did receive a submission, but which have not been added to the updated list, there are small number we are further reviewing as they were below the minimum size threshold.”

When asked which of the 524 had lost full funding or were still under review, an SFA spokesperson said: “We don’t hold an updated non-core list, this list was only used for consultation.”

But the agency has never published a user friendly list of the qualifications under review — although FE Week managed to create a list after unlocking the spreadsheet.

The data that we compiled this list from has since been taken down from gov.uk.

Andrew Gladstone-Heighton, NCFE policy leader, also told FE Week in early March: “We don’t think this short timescale was sufficient for a consultation of this nature.”

When asked this week for his views on the consultation result, he said: “I’m still disappointed with the rushed nature, and that we provide so much information for it to just seemingly disappear.

“I think the low number of qualifications added to the non-core list also reflects the fact that Awarding bodies didn’t have sufficient time to make their case.”