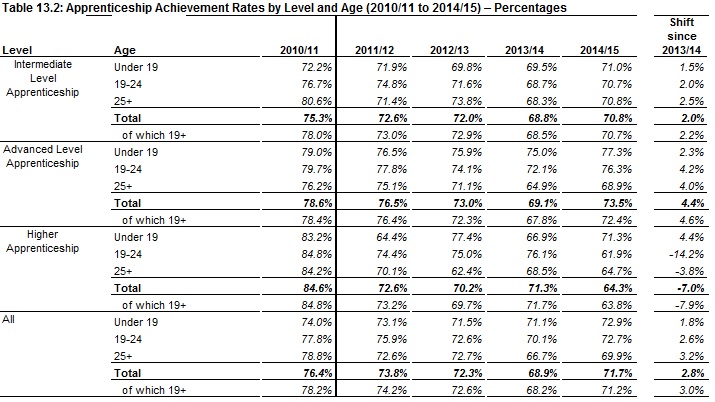 The Skills Funding Agency (SFA) twice delayed publication of the 2014/15 nationwide qualification achievement rates (QAR) – but FE Week can reveal that the apprenticeship success rate has bounced back 2.8 percentage points to 71.7 per cent.

FE Week described in December how the publication of the QAR for 2014/15 had been pushed back, with promises it would be published “towards the end of March”.

The data would normally have been published in January, and the rates were also missing from the Statistical First Release publication at the end of March owing to “changes to the collection and storage of the data”.

However, this morning colleges and training providers were given access to 2014/15 QAR figures via the SFA’s online “hub” system, and despite failing to indicate an update had been made, the SFA also added the figures to their March Statistical First Release publication (see image above).

Sue Husband, director of apprenticeships at the Skills Funding Agency, suggested at the FE Week Annual Apprenticeship Conference “that we are trending back in the right direction”, and this is now shown in the official figures.

It is not however all good news, as the higher apprenticeship QAR figures in particular fell 7 percentage points to just 64.3 percent.

A new reporting system for the 2014/15 QARs is for the first time using interactive dashboards via the Hub.

An SFA spokesperson previously told FE Week this would give providers and stakeholders “more information than we were able to publish in the PDF reports that were distributed through the provider gateway”.

See more analysis in the next edition of FE Week