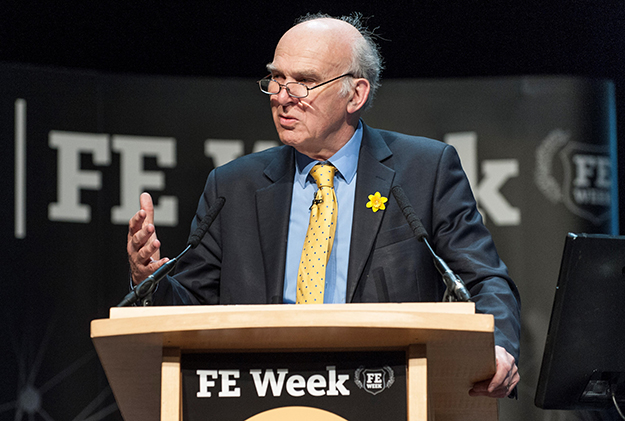 The apprenticeship levy is a “revenue raising measure” for the Treasury, former business secretary Sir Vince Cable has said.

During his speech at FE Week’s Annual Apprenticeship Conference yesterday, Sir Vince also said the levy was a “good concept” but the detail was “incredibly hazy”.

“I get the impression they [the Treasury] think they can squeeze resources out of BIS [Department for Business, Innovation and Skills] and the apprenticeship levy, I fear, may simply be a revenue raising measure,” Sir Vince said.

“I think what we need reassurance on is that this is a genuine mechanism for supporting training and apprenticeship particularly.”

Sir Vince said he had set the levy “in train” during his time in office, from 2010 to 2015 as part of the coalition government, “but it’s turning out rather differently from what I envisaged”.

“We’ve got a good concept that could work, but the detail is incredibly hazy,” he told the audience.

“What the government has done is to come up with a big idea hoping that the details will sort themselves out. I’m not sure that’s true!” he continued.

The more it’s a revenue raising measure, the more businesses will be disillusioned

Sir Vince said he was “worried rather than alarmed” about the levy, and had “several questions” about it.

“Firstly, where is all the money going?” he asked.

If all of the estimated £3bn that the levy is expected to raise “was being ploughed back into training for the companies that took it seriously, I would be enthusiastic about it,” he said.

However, he said he feared the government would use some of the levy money to support training for non-levy paying companies, “so you’ll have cross-subsidy, with an overall reduction in the government contribution”.

“If that is happening then that’s a backwards step not a forwards step,” Sir Vince said.

He also expressed concern that the levy would not boost training levels.

Levy-paying companies may “simply switch from providing training on their own account as they do at the moment, to switching it under the voucher scheme and we have no net increase,” he said.

“I saw this in government, the snobbery of the British establishment towards FE had to be seen to be believed,” he added.

He also warned that forced mergers through the area reviews were in danger of taking the sector “backwards rather than forwards”.