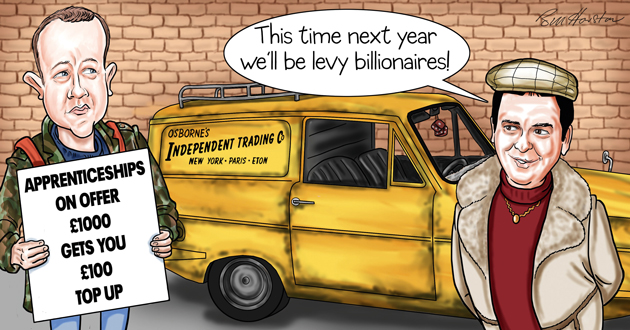 The Confederation of British Industry (CBI) has warned government plans for a 10 per cent top-up to monthly levy contributions will only benefit a small minority of employers.

The top-up plans were unveiled in a budget report published by the Treasury after George Osborne finished his speech to MPs on March 16.

The CBI director for employment and skills, Neil Carberry told FE Week: “Extra investment for apprenticeships will only help the small minority for firms who will be able to spend their whole levy.”

He added: “Businesses remain concerned that only a year away from the introduction of the levy, there is little clarity about how the system will work beyond the fact it will make taking on apprentices more expensive.

“As a result many businesses are in the difficult position of having to reduce overall training or apprenticeship numbers to pay their levy.”

Stewart Segal, the chief executive of the Association of Employment and Learning Providers, was also cautious.

He said: “We will need to understand how exactly the top-up will work and in particular how it will work for those only paying a small levy.”

The budget report stated: “From April 2017, employers will receive a 10 per cent top-up to their monthly levy contributions in England and this will be available for them to spend on apprenticeship training through their digital account.

“The government will set out further details on the operating model in April and draft funding rates will be published in June.”

The new measure comes in addition to the £15,000 allowance previously announced for levy payers, which means it will only apply to large employers.

However, Skills Minister Nick Boles has reassured smaller employers some levy cash will be recycled for them.

The Treasury said in its budget report that the levy “will be set at a rate of 0.5 per cent of an employer’s paybill and will be paid through PAYE”.

“Each employer will receive an allowance of £15,000 to offset against their levy payment,” it said.

“The government will apply a 10 per cent top-up to monthly funds entering apprenticeship levy payers’ digital accounts in England from April 2017.”

It comes after FE Week revealed on the morning of the budget that extra money is likely to be made available for 16 to 18 apprenticeships.

The Skills Funding Agency subsequently announced that it would fully fund all “high quality” 16 to 18 apprenticeships from August 2015 to March 2016.

Mr Segal said: “We’re pleased the SFA has addressed some of the growth cases for apprenticeships and traineeships put forward by providers, but this late notification will inevitably mean that some provision will be affected.”