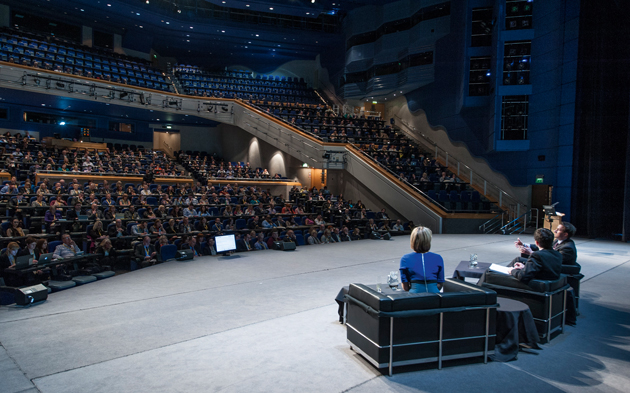 This year’s Annual Apprenticeship Conference (AAC), held at Birmingham’s International Convention Centre from March 16 to 18, featured an action packed agenda. FE Week went to press onsite at the end of the second day, so what follows is a roundup of the first two days’ highlights.

David Hill, the most senior civil servant working on the apprenticeship reforms, kicked off the event. He gave an overview of the reform programme, in his first speech since being appointed Director of Apprenticeships at the Department for Education and Department for Business, Innovation and Skills (BIS) in October.

Keith Smith, whose new role as head of the levy implementation team at BIS was announced last week, later gave more detail on how the new levy-funded system would work through the Digital Apprenticeship Service (DAS).

The DAS, which should be fully operational by January next year, will “change how you do business”, Mr Smith said, with providers contracting directly with employers and no longer able to rely on the Skills Funding Agency (SFA) to give them certainty over the budget.

During a panel debate at the end of the day, Stewart Segal, outgoing chief executive of the Association of Employment and Learning Providers (AELP), expressed concern over complexity of the new system, and warned of the potential for getting things “badly wrong”.

Earlier in the day, Graham Hasting-Evans, managing director at NOCN, had also criticised the government for the slow pace of the reforms, saying that he was “disappointed” at the lack of progress.

Speaking on the Thursday morning, Sir Michael Wilshaw, chief inspector of Ofsted, challenged providers to develop high quality apprenticeships. During a Q&A session after his speech, for which he was joined by Paul Joyce, Ofsted’s deputy director for FE and skills, Sir Michael defended his controversial views on the FE sector, saying that “when you look at the figures, it’s pretty dire”.

Shakira Martin, vice president for further education at the National Union of Students, exhorted the government to include the apprentices in its reforms, calling for the apprentice voice to be “integrated” into the Institute for Apprenticeships.

Shadow Skills Minister Gordon Marsden praised the government’s commitment to apprenticeships, but challenged it to deliver quality as well as quantity, saying that “we owe it” to apprentices.

For more on the action, look out for our AAC supplement next week.