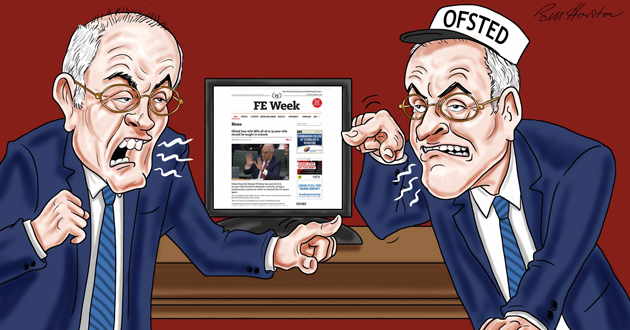 Mr Boles opened his speech at the Education and Training Foundation (ETF) Leadership Summit, held at Westminster Kingsway College on March 9 by disagreeing with Sir Michael’s comment, which provoked widespread anger in the FE sector, that all 16 to 19-year-olds should be educated in schools.

The Ofsted chief inspector attacked the FE sector during an evidence session for the Education Select Committee on March 2, describing it as “in a mess — that’s why the government is reviewing it”.

“My view is that 16 to 19 should be done in school,” he told the committee, chaired by Neil Carmichael MP.

Mr Boles said that Sir Michael had complained “over the last few months and years” about the small number of 16 to 18-year-olds doing apprenticeships.

The Skills Minister told ETF delegates that Sir Michael believed that provision for 16 to 18-year-olds who “are not going to pursue the standard academic route” had “historically been inadequate, not high quality, not a source of pride and focus, not an investment in the same way as the A-level and the full-time university course route has been”.

“So I can only assume that he was perhaps — as we all do, as I’ve often done — slightly misrepresenting his own considered views,” Mr Boles added.

FE Week’s news story about the chief inspector’s comments provoked an unprecedented and unanimous backlash, with more than 40 comments posted on the FE Week website in just 24 hours many of which criticised him for airing his personal opinions in a public capacity.

Martin Doel, chief executive of the Association of Colleges, wrote to Sir Michael, challenging him to justify his opinions about the sector.

He called on Sir Michael to provide “as a matter of urgency a clear rationale for your conclusions”.

“It would be all the better if those conclusions corresponded with the judgment of the inspectors in your organisation; I fail to see how this could be so given that 82 per cent of colleges who provide 16 to 18 education have been judged good or outstanding in recent Ofsted inspections,” he continued.

FE Week contacted Ofsted to ask for Sir Michael’s response to Mr Boles’s comments, but a spokesperson said they had nothing more to add.

A spokesperson for the education watchdog had previously said that Sir Michael’s comments were clearly his personal opinion.