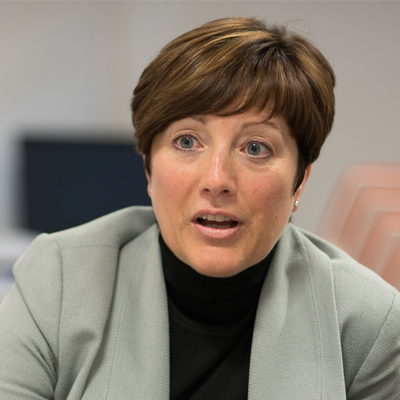 Doctors told county-level hockey fanatic Nichola Hay’s parents that she would probably never play sport again after removing a tumour from her knee — but she refused to accept this and was running around again after a year.

She credits the steely determination instilled into her by this frightening experience — along with nurturing skills developed through being the oldest of four children and raising two daughters of her own — with helping to prepare her for a successful career in training.

Hay invited me to the offices of her firm Outsource Training & Development, in the leafy London borough of Kensington, for her profile interview.

The 50-year-old clearly felt comfortable on her home patch and had prepared well — I noticed that she had made several pages of notes in a little jotter pad beforehand.

She certainly managed me well — providing coffee and plenty of biscuits is always a good starting point when dealing with a hungry journalist.

I was almost a second mother to my brother David

“I think being an oldest child gives you good management skills, especially as I was almost a second mother to my brother David.

“I definitely mother the people who work for me, to an extent. They know they have to work hard, but you want them to look forward to coming into work, not dread it.”

She added: “My parents set a good example by always working hard. My mum was a great role model, as she always worked while raising her children.

“She was corporate client manager for the Parity training organisation, with big companies like HMRC.

“I took a year off with each child, but worked up to a few days before they were born and never gave up on my career.”

Hay grew up in the Camberley area of Surrey and attended Hawley Primary School and Fernhill Comprehensive.

She said: “Both my daughters Jessica [now aged 23] and Jodie [now 19] went to my primary school.

“My daughter Jodie actually won a competition while she was there to design the school logo, so there’s a lasting link.”

She recalls sport as her main passion throughout school.

“I loved netball, tennis, and hockey. We were also had a pony at home, so I rode a lot.

“I played hockey at county level at under 14 and 16 levels, and later won the Surrey ladies’ league several times with Farnborough hockey club.”

Hay recalls being jolted from her relatively worry-free early childhood when she was diagnosed with cancer aged 13.

“I missed a year at school because I had cancer in my right knee. There was a possibility they might have removed part of my leg through the operation,” she says.

“Luckily they didn’t in the end, but my parents were told that I probably wouldn’t play sport again.

“It made me really determined to prove them wrong, which I suppose set the tone for my career. I wasn’t going to accept what they were saying, and it took me about a year before I could run around again.”

Hay needed another less invasive operation to remove cancer from her leg when she was 18, but has not had a recurrence since.

However, she recalls: “I missed almost a year of education through the first operation, which was particularly tough because I’m dyslexic.

“I eventually had to do English O-levels three times before I passed.”

Hay passed A-levels in sport and business studies, as well as a BTec in business at Farnborough Sixth Form College, before getting her first job aged 18 with the town’s branch of the Co-op bank.

“It was really old-fashioned in lots of ways — so you had little old ladies coming in for milk coupons, who wanted to chat for ages,” she recalls.

Hay was promoted to banking clerk before moving to insurance underwriting firm AUA3 as an accounts assistant before she turned 21. The role of PA to the managing director came up after about six months [at AUA3] and I got the job. “I then became an administrative assistant for the AUA3 underwriters at Lloyds, in London.

“I was one of only three ladies who passed the Lloyd’s underwriters exam at that time.

“It was a very male-dominated world, where lots of deals were done during lunchtimes in pubs that women didn’t go to.”

Hay moved on to ASM, who represented the freight forwarding industry, based at Heathrow, when she was 24.

“I did a bit of everything, from bookkeeping to PA work,” she recalls.

“I mainly worked for general manager Peter Laskow, who treated me like his daughter and taught me everything. He even took me into board meetings and showed me how to run events.

“I also met my husband Neil during this period, because he worked in freight forwarding. We have been married for 23 years.”

Hay moved to Freight Train, a training provider, specialising in the freight forwarding industry, in around 1989.

She recalls: “That was where I had my first experience of training, setting up a YTS programme for freight forwarding in the logistics sector.”

Work challenges paled into insignificance when her first daughter was born at just 27 weeks.

“She was a miracle baby and only weighed 1lb 6oz,” says Hay. “She was in an incubator for eight weeks and came out of hospital weighing 3lb 4oz.”

She adds: “When Jessica was up to four years old, she was very susceptible to infections, so was in and out of hospital.

“I was lucky I had understanding managers. They were flexible and knew I would make up work I missed.”

Freight Train was sold to Quantica in 1993, and Hay worked her way up to operations director by 2005.

She then launched Outsource Training and Development with former Quantica colleague Craig Aitken in 2009.

It is currently training more than 1,000 apprentices across a number of areas, including business, IT, marketing, retail and management.

“It was quite scary going it alone because of all the responsibility,” recalls says. “We employ just under 40 staff and they all have to be paid on time every month.”

Hay also set up a steering group two years ago to help improve knowledge of apprenticeships at Jobcentres.

“It started because we weren’t getting enough referrals for apprenticeships. I found they didn’t know enough about them at Jobcentres. We got the Government on board and it really took off.

“We’ve up-skilled apprentice champions in every Jobcentre in London (more than 140), who concentrate on promoting the programmes and linking people with training providers.”

“We send apprenticeship experts, for example from training providers and employers, into schools for parents’ evenings or assemblies, for example to explain, their benefits,” she explains. “I must have done over 50 talks myself.”

Hay “jumped at” the opportunity to join the Association of Employment and Learning Providers (AELP) a year ago.

“I did it because I’m genuinely passionate about apprenticeships and don’t think independent training providers speak up enough about all the good work we do in the sector,” she adds.

“AELP really make a difference and I wanted to be part
of it.”

I don’t know if I should say this, but I love reading hard — hitting Martina Cole books on holiday. I also really enjoyed Strong Woman by Karren Brady — partly because my family support her club West Ham, and also because of what it says on women in business, apprentices and politics.

I run a little bit and like eating out. My favourite pastime though is spending lots of time with my family.

It has to be seeing people getting out their mobile phones in restaurants or meetings at work. It’s rude.

It would be nice to have [US actor and producer] Bradley Cooper along, as he’s nice looking. Otherwise, I’d want someone from the Government, maybe [Business Secretary] Sajid Javid to discuss what is really happening on the ground with apprenticeships.

I would have liked to have been a professional hockey player and competed in the Olympics.

2015: Appointed board director at AELP