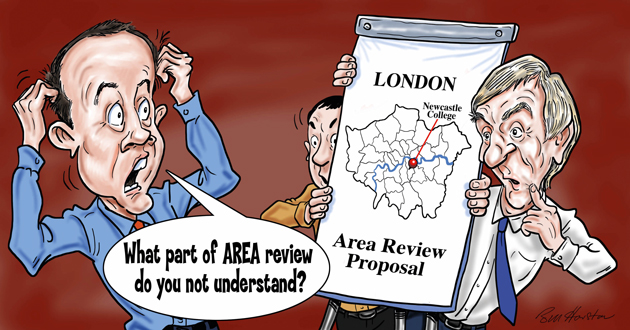 A troubled London college has been in talks with a view to “closer working” with a college group based almost 300 miles away.

The move comes ahead of the first meeting of the London (central) area review, which LSC is part of, scheduled for March 17.

“This may lead to a strategic alliance at which point options for closer working would be explored and consulted upon with all stakeholders and within the London area review.”

The college is led by Carole Kitching, who took on the role in the summer, after being principal of Newcastle College from 2013.

LSC, which has an SFA allocation of £17.2m for 2015/16, had the dubious distinction of being the first college to receive two inadequate ratings in a row from Ofsted, after an inspection in February 2015.

The college has since had three monitoring visits from the education watchdog, most recently in January. Inspectors found “reasonable improvements for learners in all areas” at the last two of these visits.

LSC and neighbouring Greenwich Community College had been in discussion with each other about a possible merger, FE Week revealed last May.

These discussions came at the same time as both colleges were undergoing structure and prospects appraisals, led by the FE commissioner, Dr David Collins. However, nothing came of those discussions.

Southwark Council proposed a takeover of part of LSC in July, but the plan was rejected by Dr Collins in August.

NCG is made up of three FE colleges, one sixth form college and two independent training providers.

Of these, two are based in Newcastle: Newcastle College, and Newcastle Sixth Form College. The remaining four members are Kidderminster College, West Lancashire College, Manchester-based Rathbone, and Sheffield-based Intraining.

Joe Docherty, the chief executive of NCG, confirmed that the group was in talks with LSC.

“I am certainly aware of the London area reviews and I recognise the importance of ensuring any discussions are positioned within that context,” he added.

A spokesperson for the Department for Business, Innovation and Skills said: “Colleges are independent organisations and are free to consider what arrangements best suit their needs.

“Where they are considering a merger then we expect this to be included as part of the area review discussions which will need to consider how the needs of learners and employers can be best met through new structures and patterns of delivery.”