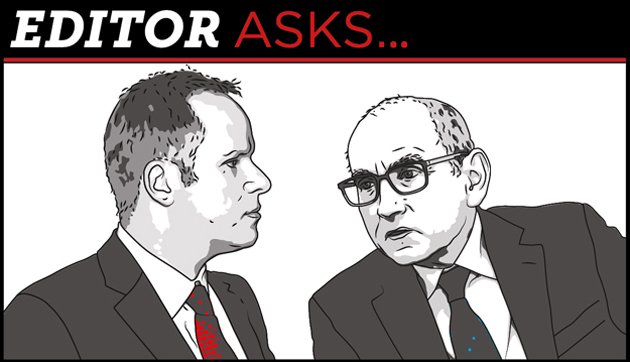 A new Funding Agencies Shared Service Team (FAS2T) covering finance, IT and data will be launched from April.

It is the latest development with SFA and EFA boss Peter Lauener’s drive to identify areas where they can work together more efficiently.

He spoke with me at length about why the Department for Education is in a hurry to recruit for the FAS2T role, and what further efficiency savings can be made across both agencies.

“We have significantly reduced the number of senior roles [across both agencies] by essentially merging two into one,” said Lauener.

I looked at a number of areas where I thought, actually, there is scope to join up here

“We weren’t able to fill all the roles, as we established the new shared service operation and we have brought in one or two senior colleagues to establish the senior team.

“One senior role that is really critical to the operation is for data [overseeing FAS2T], so that has gone out to advert and I am very interested to get some new ideas and expertise.

“Both the EFA and SFA have got vast quantities of data that we manage and I think we can do a lot better to analyse it, to use it and actually share it.”

He added: “With the EFA, you have the quite significant benefit, we have developed a lot of our data work around 5,500 academies, which as you know has grown enormously over the last four years.

“We are used to handling very large quantities of data and putting it into this matrix, and all that kind of stuff. There are lots of lessons to be learned.”

This was in contrast to the EFA, where permanent staff numbers increased over the same period from 753 to 837.

“When I was appointed chief executive of the SFA back in November 2014 [he already ran the EFA], I looked at a number of areas where I thought, actually, there is scope to join up here,” Lauener said.

“Of the areas that I have chosen to do that, first of all we have established a joint area review delivery unit. It’s the team of people that supports the area review steering group.

“People from the SFA and EFA are working on that to make sure we are working with local partners to deliver the programme of area reviews on time.”

Lauener added the second area falling under Mr Mucklow’s responsibility was the drive “to bring together intervention teams”.

“It doesn’t really take a stroke of genius to think that there might be sensible ways of bringing these together, so I brought all of these people together.”

Lauener added an obvious benefit of this would be removing the need for EFA and SFA representatives at the same meetings.

Reflecting on the joining-up of finance and systems, he said: “Both the EFA and SFA have developed much better systems in recent years.

“In the EFA, we have just introduced a much more secure payment system, and I frankly expect to put the SFA on the same system because it is better and cheaper to operate.”

FE Week readers have been through a huge amount of turmoil with data returns as new SFA systems have been introduced in recent years — notably the Learning Aims Reference System, funding information system, and the Hub.

When pressed on whether his reforms would lead to a fresh round of upheaval, with the bringing together of EFA and SFA systems, Lauener said: “We are not rushing into anything. I don’t think people will suddenly see a change in the systems they use.

“We are doing some quite careful methodical work to say what is the best set of systems for the future — where are the legacy systems that we need to take out because they are just ineffective, and are there on either platform are there systems that are operating better?”

But the drive towards more shared services begged the obvious question of why both agencies don’t just merge completely.

The Government has so far steered clear of this option, even though it could potentially produce huge efficiency savings.

Yet it has no such reservations about forcing through college mergers to cut costs, an irony not lost on many people who care about FE, myself included.

When asked about this, Lauener said he was currently “trying to put to one side the question of whether there should be a merged agency — let’s get on with the sensible things to do to save resource”.

He did not completely write off the idea, adding: “At some point we may come back to question of whether there should be a merged agency, but that is actually a matter for the two parent departments.

“I’m quite happy to operate in the way they ask me to. If it comes to joining up the agencies completely, then that will be absolutely fine, but there are no plans currently to do that.”

At the moment, a college has an EFA and an SFA person they will liaise with.

When asked if this would change, Lauener said: “I would like to get to that. I think that would be a very sensible thing to do.”