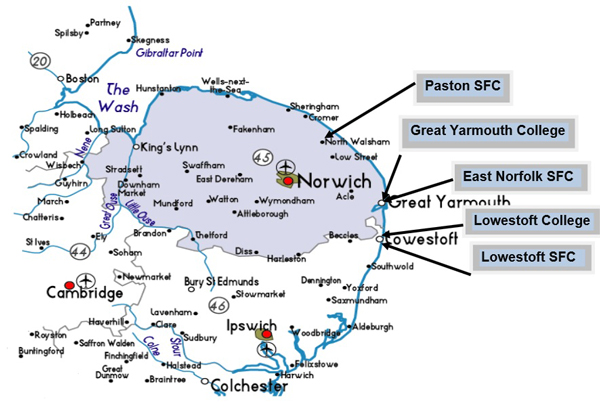 Five FE and sixth form colleges involved in a pilot review of post-16 provision in Norfolk and Suffolk last year will be revisited in November, the Department for Business, Innovation and Skills (BIS) has confirmed.

The news of the revisit as part of the region’s planned area review comes as 11 colleges in Norfolk and Suffolk this month announced a collaborative partnership aimed to improve the quality of education across the area.

BIS confirmed to FE Week that the upcoming area review would be broader than the pilot, looking at post-16 education and training provision across the two counties, how that meets local need and the extent to which colleges may need to make further changes.

Lessons learned from the pilot have been incorporated into the area review framework, BIS told FE Week.

Following the pilot, which was carried out during the first five months of last year, the five colleges involved announced merger plans.

Great Yarmouth College, Lowestoft College, and Lowestoft Sixth Form College said they are looking at forming a partnership, “designed to combine their strengths but still protect the individual identity of each college”.

Christina Sadler, merger project manager for Lowestoft College, Great Yarmouth College and Lowestoft Sixth Form College, said: “While we are unclear as to the extent of our involvement, we are happy to co-operate with and engage in the area review as required.

“In the meantime, we are continuing to work on our merger plans to secure our future for our learners and for the businesses in the east coast region.”

“Merging was one of the recommendations from the pilot review and this is being implemented. We are aware that wave five of the area review is due to return to Norfolk and Suffolk towards the end of the year. However, we are expecting to have significantly progressed our plans by this time.”

A report published last July by Mr Mucklow said that it was “clear from the evaluation, that it would be difficult for all five [colleges] to stand alone in the longer term.