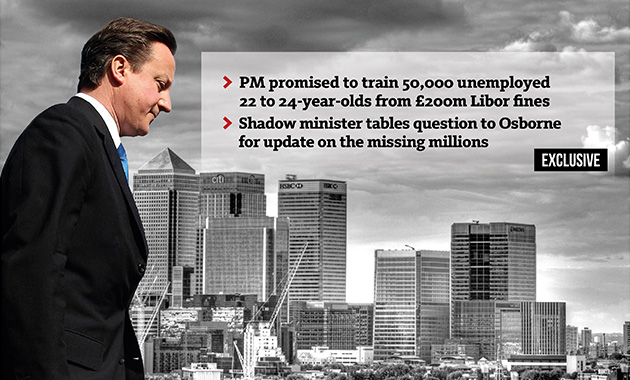 George Osborne has been challenged to reveal in Parliament whether a proposed apprenticeship fund created from Libor fines – promised by the Prime Minister in the run-up to last year’s election – has been scrapped.

David Cameron pledged last April that if he won the election, his government would fund 50,000 apprenticeships and traineeships for unemployed 22 to 24-year-olds using a £200m pot from fines paid by bankers in the wake of the Libor scandal.

Since then no further detail about the proposed fund has emerged, leading the Shadow Skills Minister Gordon Marsden to table a parliamentary question to ask for an update.

He lodged the question after repeated enquiries from FE Week on the fund were met with a wall of silence from government.

“What progress has been made by Treasury officials on incorporating the proceeds of the £227 million fine, imposed on Deutsche Bank in relation to their Libor activities, into a new three year fund to create 50,000 apprenticeships, as outlined by the Prime Minister in his April 2015 announcement? ” he asked the Chancellor on Friday.

The key election promise was widely reported at the time, with coverage from major news outlets including The Sun, the Financial Times and the BBC.

When asked by FE Week if the Government had scrapped plans for the fund, a Treasury spokesperson refused to confirm or deny it.

“Further announcements that support the Government’s commitment to delivering employment opportunities for young people will be announced in due course,” the spokesperson said.

A spokesperson for the Conservative party also refused to confirm whether the pledge had become government policy, adding that it was “something you need to talk to No 10 about”.

However, a spokesperson for No 10 then told FE Week that a response would be “better off” coming from the Treasury.

A spokesperson for the Department for Business, Innovation and Skills also directed our enquiry back to the Treasury, which declined to comment for a final time on Wednesday.

A number of banks were hit with fines for rigging the London interbank offered rate (Libor).

These include Business Secretary Sajid Javid’s former employer Deutsche Bank, which was fined $2.5bn (£1.7bn) in April 2015, of which the UK received £227m.

When he announced the fund last year, Mr Cameron said: “We’re going to take the fines from the banks who tried to rig markets – and we’re going to use it to train young people and get them off the dole and into work.

“This is about taking money off those who represent Labour’s failed past, and giving to those who through their hard work and endeavour can represent a brighter Conservative future.

“This is about offering hope, spreading opportunity, sharing prosperity – it’s about securing a better future for you, your family and for Britain, and from now until polling day I’m going to fight for that future with every ounce of energy in my body.”

The Chancellor has three working days to respond to Mr Marsden’s question.