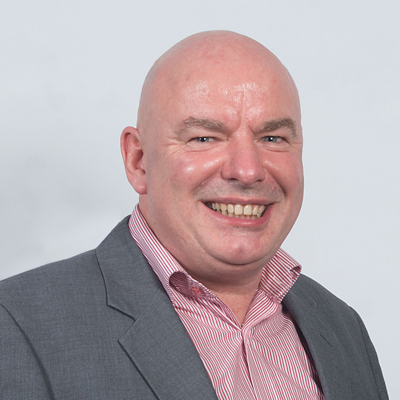 It’s been a big week for Neil Cain, who has seen his name in lights after being crowned Apprenticeship Champion of the Year for 2015.

The 51-year-old operations director for grounds maintenance company John O’Conner received the award on Tuesday, almost 36 years since he began his own apprenticeship course at 16.

He enjoyed the focus on English, maths and religion, but it took him a little while to settle on a career plan. Cain’s family had worked in the shipyards for generations, but his father was sceptical about future job opportunities.

“He was in the management and realised that long-term the shipyard industry had no future,” Cain says.

My family believed it was the right thing for me to be having an apprenticeship, so they’re thrilled

As a result, he turned to his mother’s side of the family, who were from a rural location in south Tyneside and had always been involved in horticulture.

Cain mentioned this background on a visit to his local jobcentre in 1980, and was told that Sunderland Council’s parks department was advertising for apprentices in horticulture.

He decided to go for it and took a City and Guilds apprenticeship with the department: “I was delighted at the sponsor of my award last night, I was thrilled that it was City and Guilds.”

He was one of 20 who joined the programme to do an induction into all areas of horticulture with the parks department’s training division.

Of the group, 10 were then selected to go on and start a phase one City and Guilds Horticultural Apprenticeship at East Durham and Houghall College, while the other 10 continued with the in-house training.

Cain was thrilled to be one of those selected to move up, and says that his group became very close.

“It was fantastic because straight away you knew you had been selected on your ability, on what you were delivering on the ground,” he says, adding that most of those 10 people went on to take up management roles in the horticulture industry.

Cain says the course was very challenging, but he was grateful to have a full-time day release for 30 days over the year, with a good mix of classroom in the morning and practical horticulture in the afternoon.

Cain finished this training at 21 and decided to pay to do a supervisory management course at Sunderland University.

At the same time, Michael Walsh, a park manager in the Houghton-le-Spring area, was looking for a horticultural foreman and Cain ended up seconded into this role.

Cain says Walsh was a fantastic mentor. Keen to make Cain a full-time foreman, Walsh said if he dropped his course to continue working in the park, he would pay for Cain to go back to Sunderland University the following year.

Cain took up the offer: “It was equivalent to a level four course, and very quickly I went from being foreman to park superintendent at the age of 23.”

The park also paid for him to complete a level 5 in horticultural supervisory management at East Durham and Houghall Community College. After Walsh was promoted Cain took over his job as acting park superintendent.

The next stage of Cain’s career was influenced by government policy, when the then Conservative government planned to outsource the parks departments.

Cain turned to look at opportunities in the private sector and after meeting brothers Tony and Pat Brophy, joined their father’s company, CM Brophy, to work in a supervisory management role as the firm competed for parks contracts across the UK.

The new job saw Cain move away from home for the first time, relocating to Croydon, south London, at the age of 24 and then getting married in 1989 to his wife Jax.

Six years later, the couple were expecting their son, Samuel, and moved to Kimpton in Hertfordshire to be nearer to Jax’s family.

Cain and his family are still living in Kimpton and he has enjoyed becoming part of the community there.

“I must have been doing something right because last year I got recognised for my community work for the village,” he says, explaining how he raised over £100,000 to design and project manage a new pavilion for the local football club.

Despite Cain’s love of the sport, his son is more interested in urban art and is currently studying at Central Saint Martins College in London.

In 2011, Sam also considered following his father in the apprenticeship route. After completing a foundation level 2 in engineering at school, Sam looked for options but found little available locally.

“Even though they had a skill gap, no one had any bespoke apprenticeships. On one apprenticeship we did find they wanted him to then go back to do his level 2, which had already done as a diploma, when he was in year 11.

“It didn’t make sense at the time so then he went and did his A-levels and found a real passion for art.”

In the same month that Sam was born, Cain also took on a new position, after being approached by Fountains Forestry.

Fountains had been successful in Scotland and was broadening out across UK, hiring Cain in a “compulsive competitive tendering” management role. He spent 13 years working with Fountains, but in 2008 another change of direction came from a lunch meeting with John O’Conner, who had been one of his first subcontractors in 1988.

“John was always someone who I could go to if I ever wanted to gain any knowledge or experience,” Cain says.

Cain adds: “I think it’s fair to say we’ve offered hundreds of work experience placements, traineeships and apprenticeships since we launched that in 2010.”

The latest initiative is to get all apprentices and junior managers to set their own career enhancement plans, with support from the senior management.

“We’re dovetailing that enhancement plan to ensure that as we secure more business we’ve got people already in place who can provide the right support. We’re looking for controlled growth to turning over £20m by 2020.

Cain says his family were thrilled that all his work on apprenticeships over the years has now been recognised by the Apprenticeship Champion of the year award.

“They always believed it was the right thing for me to be having an apprenticeship, so it reinforced to them that they’d made the right decision as parents, coaching and supporting me down that route,” he says.

“Someone asked me how I felt at the awards ceremony, and we have an expression in the north east: when someone asks you ‘How are you?’ people say ‘I’m champion!’ That really is how I felt.”

I like taking books away on holiday, especially autobiographies. I just like reading about people’s work, especially entrepreneurs and business

Getting involved in my village and supporting as many community events as I can. The village May festival raises over £30,000 in that weekend, but it takes a year to plan it. I also love music, indie bands, and discovering bands before they’ve really started to get big

I haven’t got a pet hate really, but I don’t like Newcastle Football Club!

I’m a big Paul Weller fan; he could play me some tunes

I wanted to play for Sunderland