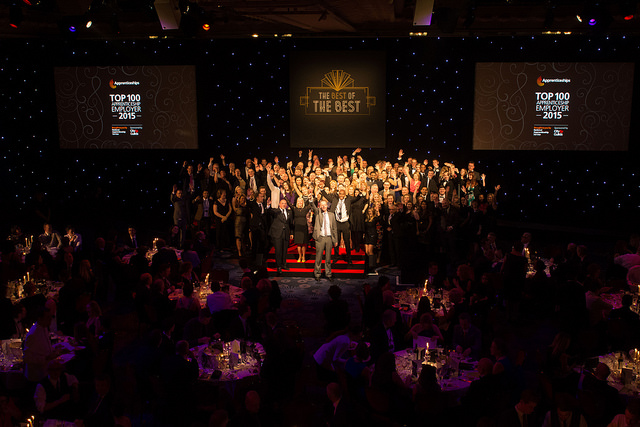 The winners of the 2015 National Apprenticeship Awards have been announced at a ceremony attended by Skills Minister Nick Boles and the Prime Minister’s apprenticeship adviser Nadhim Zahawi.

The crowning glory of the event in Grosvenor House hotel last night (January 27) was the Apprenticeship Champion of the Year Award, which went to Neil Cain, aged 51, an operations director for grounds maintenance company John O’Conner.

Commenting on the achievement, Mr Cain said: “Ever since I started my apprenticeship in 1980 I’ve really enjoyed working with other people. I still use everything that I’ve learned on the journey.

“In terms of my industry, this award will make a massive difference.

“The horticultural industry has got a real drive at the moment for pushing apprenticeships across to all the boys and girls throughout the UK.”

At the finale of the 12th year of the competition, three apprentices in their early twenties scooped the Intermediate, Advanced and Higher Apprentice of the Year awards.

For Higher Apprenticeships (levels 4-7), this year’s winner was Jade Aspinall, 23, who studied with Alliance Learning, and is now working as a manufacturing engineer for MBDA UK.

Jade finished her four year apprenticeship in September, and said it was “the best decision of [her] life”.

Her parents wanted her to go to college and then university, but in her second year at college she met an apprentice from MBDA who told her all about the work — not only was she learning but also earning her own salary, while Jade was working part-time at Morrison’s supermarket.

This experience, combined with a university open day where she was encouraged to join a course that would help her into a job with companies like MBDA but would leave her with £36,000 of debt, made up Jade’s mind.

“From that point it was a no-brainer — I was doing the apprenticeship,” she said.

She added winning the National Apprenticeship Service (NAS) Higher Apprentice of the Year Award was “massive”.

“I wasn’t expecting to win at all … As a woman in engineering I can use this to promote what I’m doing, to give back to young people when I go into schools – it’s not just that I’m an apprentice, I’m an award-winning apprentice.”

Awards were also handed out to employers on the night, and the Nas published the list of Top 100 Apprenticeship Employers 2015, sponsored by City & Guilds.

BAE Systems gained the prize for Macro Employer of the Year and Steve Fogg, managing director of shared services, said the event was “fantastic”.

“If you look at the teams today, everybody is really proud to be here. I had the pleasure of presenting an award to tonight as well as receiving one and there’s nothing like doing both. It’s great.”

The EAL Award for Advanced Apprentice of the Year

The McDonald’s Award for the Intermediate Apprentice of the Year

The Unilever Award for Small Employer of the Year

The E.ON in partnership with the National Skills Academy for Power Award for Medium Employer of the Year

The BAE Systems Award for Large Employer of the Year

The BT Award for Macro Employer of the Year

The EDF Energy Award for Newcomer SME of the Year

The Rolls-Royce Award for Newcomer Large Employer of the Year