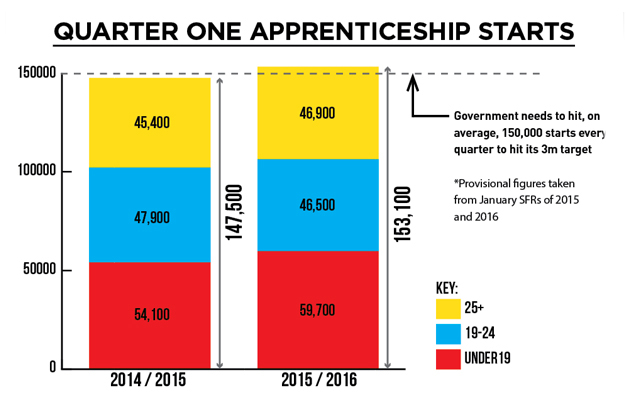 Reformed apprenticeships have shown little sign of taking off in latest government statistics that indicate the programme could be on target for Prime Minister David Cameron’s 3m target.

Just 700 starts across all ages and all levels were listed for the new standards in the statistical first release, published on Thursday (January 21). There were 400 confirmed for the whole of 2014/15.

The figure, which relates to the first quarter of 2015/16, is a stark contrast to the 153,100 starts on apprenticeship frameworks, which are being phased out for standards. It compares to 147,500 starts for the same period last year.

All the figures are provisional, but it paints a picture in which starts across the framework board were up 4 per cent on the same figures last year.

And to hit the Mr Cameron’s 3m target in the next five years there needs to be an average of 600,000 apprenticeship starts per year, or 150,000 per quarter.

However, the final figures could yet call this success into question. Last year’s final figures showed the first quarter to carry the most new starts at 163,600 — subsequent quarters brought lower figures, resulting in total new starts of 499,900 for the year.

Association of Employment and Learning Providers chief executive Stewart Segal said: “Adjustment of the provisional data for 2015/16 may lead later to better figures, but we are concerned that the programme is not growing at a pace we would like and in particular for 19-24 year olds.

He added: “Not all 19+ growth requests during this year have been approved and we are still waiting on the 16-18 responses as well which is a real concern when we are already half way through the year.”

But the provisional figures also showed an increase in the number of new traineeship starts, with 7,600 starts recorded in the first quarter of 2015/16, compared to only 5,000 for the previous year. And the growth could well continue with news, reported by FE Week on January 20, that restrictions limiting who can deliver traineeships were to be lifted next month rather than from August.

Skills Minister Nick Boles said: “Apprenticeships and traineeships are creating the highly skilled and productive workforce that is supporting our country’s economic growth. We are on the right track to delivering 3m apprenticeships by 2020.”