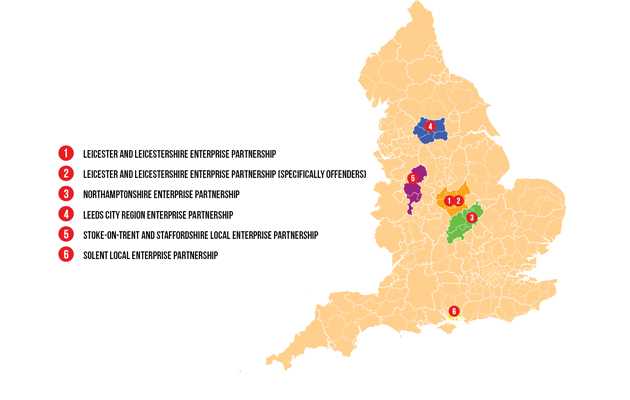 Details of the first five areas involved in the first round were unveiled by the Skills Funding Agency (SFA) and ESF (and are available here) — more than four months after the previous 2007 to 2013 ESF contracts closed on July 31.

They provide confirmation of a series of exclusive FE Week articles that have outlined the timeline for the tendering process and also where in England the contracts would be heading (see main image above).

But today’s tender document shows that while invitations to tender close in 42 calendar days on January 18, that means just 27 working days excluding weekends and public holidays.

And then, after tenders totalling £14.86m have been awarded on March 30, winning bidders will have only 11 working days before delivery commences from April 14.

However, the document indicated that the application process could still be subject to change when it said that the SFA “reserves the right to modify, amend or provide further clarification regarding the on-line tender documents at any time prior to the deadline for completion”.

“The SFA will notify you [providers] either by direct communication or as a broadcast message on the online message board,” it added. “Where such modifications constitute a significant change, the SFA may, at its discretion, extend the deadline for completion of the documents.” It was exclusively revealed by FE Week on Friday (December 4) that the local enterprise partnership (Lep) areas that the invitations to tender would go to included Stoke-on-Trent and Staffordshire, and Solent (covering the Isle of Wight, Portsmouth and Southampton).

Today’s SFA document revealed that the biggest single contract is for Stoke-on-Trent and Staffordshire, at £6.5m.

There would, it stated, be six contracts for Leeds City Region sharing £4m funding, while two separate contracts for Leicester and Leicestershire will be worth £2.45m and £909k respectively.

It comes after an SFA spokesperson told FE Week on Thursday (December 3) that “the second set of invitations to tender are scheduled to be launched on [Monday] December 14”.

“The procurement programme is flexible and when we are in receipt of agreed specifications from local enterprise partnerships (Leps), we will process and launch them in appropriate sets, at regular time frames,” she added.

It follows another FE Week exclusively on November 10, which revealed how the SFA was planning to run a “sequence of procurement” for handing out £650m of delayed ESF cash, which must be finished by the end of September next year at the very latest to allow a minimum delivery period of 18 months.