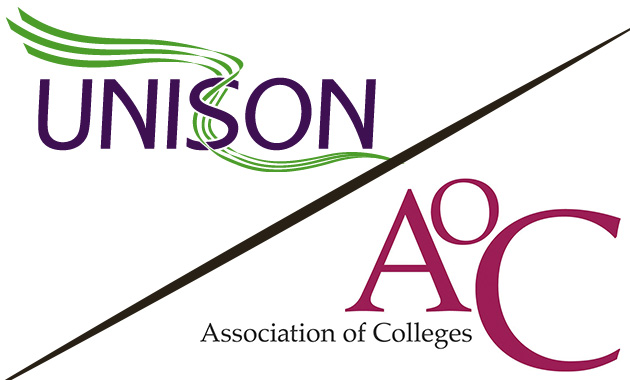 Trade union Unison will ballot FE workers in England in the New Year, in the latest development of an ongoing row over pay.

The ballot is in response to a zero per cent pay offer for 2015/16 made by the national employers’ organisation, the Association of Colleges (AoC), in the summer.

Unison represents 25,000 workers in FE colleges in England and it says around 80 per cent of these are likely to be covered by the ballot. The workers involved include technicians, managers, library, catering, cleaning, security and other support staff.

Unison has already carried out a consultative ballot of members on the pay freeze, the results of which were announced in October. A total of 95 per cent of those voting in the ballot rejected the offer and twice as many colleges participated as last year.

The union then wrote to the AoC, and the colleges it negotiates for, with the result and a warning that unless the offer was improved the union would be “in dispute” with them.

Next year’s ballot will cover all those colleges that are members of the AoC and have not made an improved local offer.

Dave Prentis, Unison general secretary, said: “Following years of pay restraint, this non-offer by FE employers is insulting and is driving workers to take their anger to the picket lines.

“Another year of pay restraint will do nothing to help recruit, retain and motivate staff in the sector. Many will have no choice but look for jobs that pay better.

“There is still time for employers to come back to the negotiating table and come up with a fair pay offer that rewards staff for the hard work they do.”

In response to the announcement of the ballot, Marc Whitworth, director of employment services and policy at the AoC, said: “The pay recommendation made by the AoC reflects the feedback we have had from colleges about the stringent financial circumstances in the sector.

“Although not unexpected it is nevertheless disappointing that Unison will ballot for action in the New Year. There is a willingness from the employers’ side to continue to engage with our union colleagues to protect the prospects of FE, its skilled workforce and the students it serves.”

Unison says it will continue to work with other FE unions to seek to achieve an improved offer from the AoC.

The University and College Union (UCU) has also responded to the proposed pay freeze, with 207 colleges affected by strike action organised by the UCU on November 10.

A UCU spokesperson told FE Week that a decision was yet to be made over whether they should take further action, saying: “Following the strike last month, our FE members are due to meet on Friday, December 11, to decide on next steps.”

The UCU strike was called after talks over the AoC’s proposal for a pay freeze in 2015/16 failed to reach agreement. At the time, an AoC spokesperson told FE Week: “We haven’t got any plans to reopen negotiations.”

The UCU strike was announced in October, after a ballot of members on the pay freeze proposal resulted in 74 per cent of those who voted (4,184) backing industrial action.