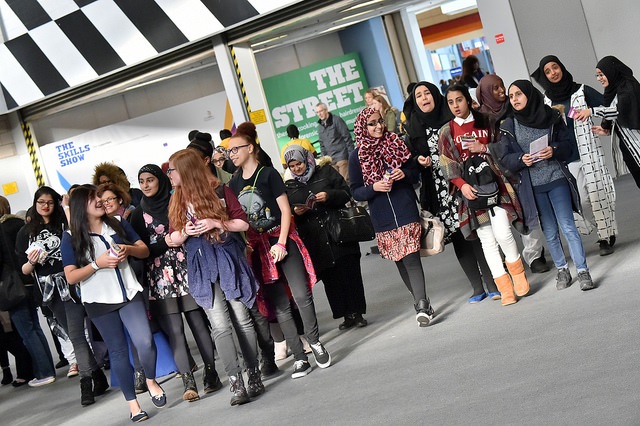 Record numbers of young people, teachers and parents visited the Skills Show in Birmingham last week, with figures for Saturday showing a 44 per cent rise on last year.

A total of 78,324 people visited the show over the three days, with 20,597 of those on the Saturday, according to figures released today by organisers Find a Future.

“The success of this year’s event demonstrates how much demand there is for excellent careers advice on vocational education, training and apprenticeships. “Our Saturday opening saw high numbers of families attending together to learn about vocational careers – a clear indicator of how keen parents and guardians are to be involved in their children’s career choices.”

Visitors to the NEC also had the chance to watch more than 670 talented young people taking part in the finals of 58 WorldSkills UK Skills competitions, with successful entrants later named in Squad UK to train towards selection for WorldSkills Abu Dhabi 2017.

Meanwhile, medal winners in the plastering, bricklaying and roofing (slate and tiling) competitions have now been announced.

The results in these competitions were not among those announced on Saturday, as they needed to be “re-verified” according to Find a Future.

Among the late results was a win in plastering that brought City of Glasgow College’s tally of gold medals to five.

Hull College and Newcastle College both scored their first gold medals of the competition, in bricklaying and roofing (slate and tiling), respectively.

The final list of Squad UK members is expected to be announced tomorrow (November 25) — 148 squad members have already been announced.

“The opportunity to see competitors in action in the WorldSkills UK Skills Competition finals is a vital part of the Skills Show,” said Dr Bentley.

“They are the link between the skills which visitors try for the first time at the event, education and training opportunities, employers and achieving success.

“Watching their peers in action is incredibly motivating for young visitors, while the involvement of our Skills Champions — former competitors on the world stage — at this year’s event provided our audience with the chance to discover first hand what it is like to succeed at the very highest level.

“We are confident that those named in Squad UK for 2017 will continue to drive performance standards in competitions still further, and inspire even more young people to take up vocational careers.”