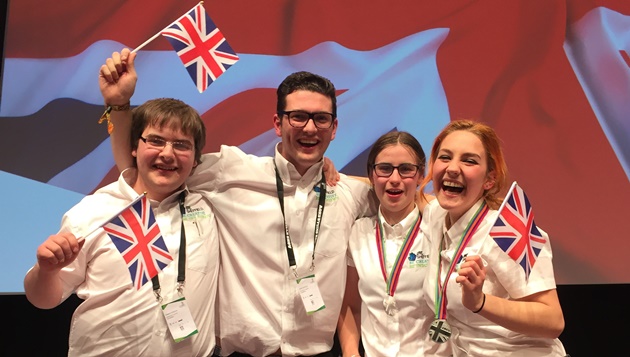 Nearly 150 young people are one step closer to taking on the world’s best, having been listed among the WorldSkills UK squad.

The names of most of those who will begin training with the aim of representing Team UK at WorldSkills Abu Dhabi in 2017 were announced on Saturday night at the closing ceremony for the Skills Show in Birmingham.

Dr Neil Bentley, chief executive of Find a Future, which manages the UK’s entry into the WorldSkills competition, said: “I offer my huge congratulations to every young person who has secured a place in Squad UK at The Skills Show 2015.

“By competing in the WorldSkills Competition, the UK is able to share best practice in apprenticeships, further education and skills with countries around the world, raising standards on a global scale.”

Business Secretary Sajid Javid said: “The young people who have earned a place on Squad UK are worthy ambassadors and demonstrate how high quality apprenticeships and technical training can be a fast-track to a top career.

“I congratulate each and every member of Squad UK and look forward to hearing about their preparations for 2017’s competition in Abu Dhabi.”

The 148 young people, including winners from this year’s Skills Show finals, who have so far been named for Squad UK (see list below) represent 83 different FE providers across the UK, including FE colleges, independent learning providers and employers. City of Glasgow College and Coleg Sir Gar have the next highest number of learners on the squad, with six each.

The highest ranking English provider, with four learners in the squad, is University Technical College (UTC) Sheffield. Its four learners are (pictured main, from left) Edward Anderson, Jacob Staniforth, Hannah Saville, and Jaye Griffiths, all aged 18 and they will be aiming to represent Team UK in industrial control.

Squad UK members for bricklaying are expected be announced on Wednesday, November 25, as the results of the national finals have not yet been announced.

The results in the roofing (slate and tiling) and plastering competitions have also been delayed, but these skills areas are not represented at WorldSkills.

A spokesperson for Find a Future, the competition organisers, said the delay was because “it will be necessary to re-verify the results of these competitions”.