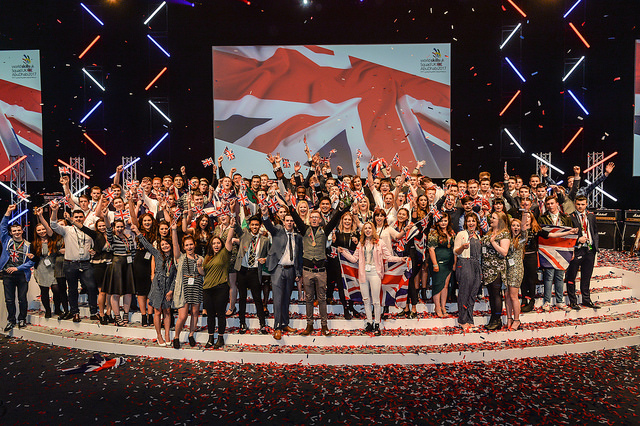 City of Glasgow College emerged the big winner from Skills Show 2015 in Birmingham as it claimed eight medals, including four golds — the most for any provider.

The Saturday closing ceremony, which marked the culmination of national skills competitions finals, also saw the announcement of most of the long squad (pictured above) ahead of the next WorldSkills competition in Abu Dhabi in 2017.

“As the UK’s official delegate for WorldSkills competitions I know I’ve seen young people with the potential to succeed in the heat of international competition, when the next WorldSkills event is held in Abu Dhabi in 2017,” said Mr Lauener.

“Every competitor I’ve seen this week in Birmingham knows that they have the skills which will give them a good career,” he said.

“They will create wealth and prosperity for themselves and their families and their communities, all because of their skills.”

Dr Bentley said: “I am certain that those who make it on to that plane to Abu Dhabi will fly the flag for the UK with pride.”

The names of most of those who will make up Squad UK were also announced at the end of the night. These 200 people, who were selected on the basis of their success at UK Skills 2015 and 2014, will begin training with the aim of representing Team UK at WorldSkills Abu Dhabi in October 2017.

The results of the bricklaying, roofing – slate and tiling, and plastering competitions have not yet been announced.