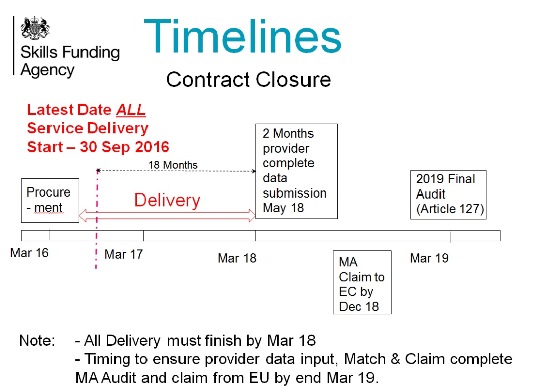 It is planning to run a “sequence of procurement” that must be finished by the end of September next year at the very latest to allow a minimum delivery period of 18 months.

It follows a summer in which ESF-funded providers were forced to lay off staff amid delays in issuing 2014-2020 contracts as the government sought to iron out regional devolution issues. “As a consequence, all ESF contracts will have to come to a close in March 2018.

“By closing the contracts at this time, the SFA will have enough time to accrue the necessary match-funding and gather the necessary data from providers to submit our claims to the European Social Fund Division (ESFD) by the summer of 2018.

“This will then give ESFD enough time to make claims to the European Commission before the end of 2018, triggering final audits in 2019.

“However, at the same time we are also aware that we are all under pressure to begin to spend the ESF following the late approval of the Operational Programme in order to avoid any future financial penalties.”

Mr Bell’s letter, which was leaked to FE Week, adds that Lep and ESIF committees could either “retain the current funding, targets and outcomes to be delivered within a two rather than a three-year period,” or the SFA would “reduce the funding and deliverables pro rata to fit the two-year period”.

“This option will not help meet the spend, targets and outcomes allocated for the period and as such is less favoured by the Managing Authority,” wrote Mr Bell.

He added: “We realise this will be disappointing to some of you but we are now in a position in which contracts must be closed at the end of the 2017 to 2018 financial year.

“The attached timeline shows the tight deadlines that we will have to meet so that all contracts are at least 18 months long.”