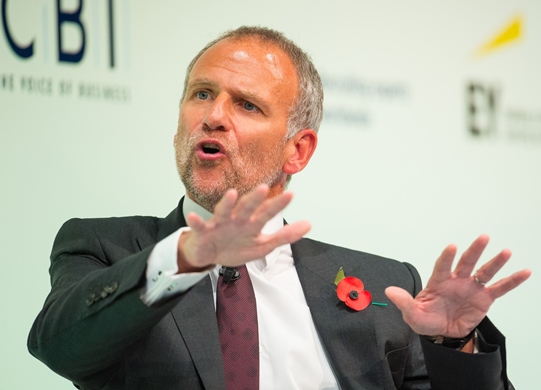 Prime Minister David Cameron today called on businesses to back the apprenticeship levy — only for Tesco chief executive Dave Lewis to later warn how it would “wipe out” the supermarket giant’s entire annual training budget.

Mr Lewis (pictured above) issued the warning as he called for a “balance to be struck” between allowing firms to invest and the government’s collection of taxes.

They were both speaking at the Confederation of British Industry (CBI) annual conference today, with Mr Cameron explaining how the levy was key to his hopes to achieve 3m apprenticeship starts by 2020.

“We have to share some of the burdens, and that’s, of course, what the apprenticeship levy is all about.” he told business leaders at the conference.

He added: “We are asking a lot of you, I accept that. We’ve set this target for 3m apprentices in this parliament, compared to the 2m we trained in the last parliament and were introducing the apprenticeship levy to pay for that policy.

“I think it’s in both our interests and I think it’s actually in the interest of responsible businesses who train apprentices and pay forward that money not to have other business that don’t spend the money on training but take the apprentices after they’ve been trained by their competitors. I think this is in our interest.”

The official consultation on the levy proposals ended last month amid widespread speculation that if adopted it could well be set at 0.5 per cent of payroll costs.

And for Tesco, based on its 2015 annual report and financial statements [see note 4 page 100], this would give it an apprenticeship tax bill of £41.3m.

But Mr Lewis, in an interview with Sky News Business presenter Ian King, was clear about what the levy could mean for the accounts of his company, which is an employer provider and was rated as good by Ofsted at most recent inspection, in January last year. It also has a current Skills Funding Agency allocation from the adult skills budget and 16-18 apprenticeships of just over £3m.

“I’d like us to be able to innovate together on tough employment, skills and training challenges,” said Mr Lewis.

“The opportunity for government is to enable us to continue offering personal mobility through training, development and progression. We can do the heavy lifting, from no skills to some skills.

“To continue offering crucial flexibility to enable mums and older workers to return to work in very large numbers.

“Let’s not constrain ourselves after a decade of progress, creating 5,000 long-term jobs for the unemployed in locations from Corby to Woolwich through our regeneration partnership scheme, or to choke the progress that’s created 9,500 apprenticeships between 2012 and 2014.

“Employers like us can be innovators on tough agendas, sharing the burden of government priorities. But a balance has to be struck between allowing investment for growth and collecting taxes through mechanisms like the apprenticeship levy, which wipes out the equivalent of our entire training budget.”