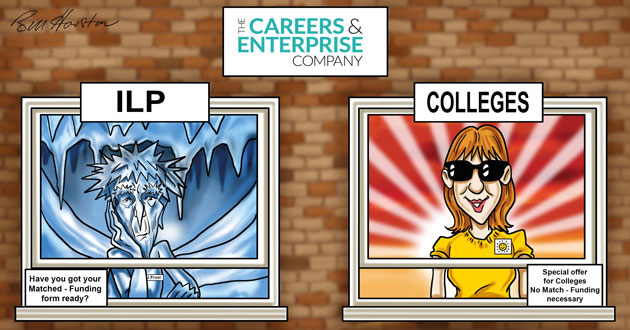 The Careers and Enterprise Company (CEC) is in hot water for expecting independent learning providers (ILPs) — but not colleges — to stump up matched funding for a share of a £5m pot of cash aimed at addressing careers guidance “cold spots”.

A spokesperson for the employer-led CEC announced on Tuesday (November 27) that the new fund would pay for between 15 and 25 projects in areas its research had shown were most in need of “careers and enterprise support”.

An accompanying report said that groups containing at least six providers, which could be comprised of all FE colleges, or a mixture of colleges and schools, could bid for contracts worth between £50,000 and £1m.

The report had not made it clear whether ILPs could apply, but interim head of the fund Ian Anderson told FE Week that they could either as part of a group of ILPs, or along with colleges or schools.

Stewart Segal (pictured right), Association of Employment and Learning Providers (AELP) chief executive, said this was unfair and told FE Week on Thursday (October 29) that he would raise the issue with the CEC.

“We strongly feel that the bidding rules should apply to all types of training provider,” he added.

CEC has identified more than 20 regions across England, Prioritisation Indicators, where young people were missing out most “on the support needed to help them prepare for, and take control of their futures”.

A spokesperson said that the research, which for example took into account the proportion of employers that consider 16-year-old school leavers “poorly or very poorly prepared for work”, would “form the basis” for where the £5m was allocated.

Mr Anderson said that it would be up to applicants to explain in their proposals how they would spend the money on improving careers and enterprise support for 12 to 18-year-olds.

It comes after the company unveiled plans earlier this year for its team of ‘enterprise advisers’ to provide careers advice in thousands of colleges and schools across the country.

Mr Anderson said that these advisers could “collaborate” with groups of FE providers handed a slice of the £5m fund to help them implement their schemes.

Catherine Sezen, 14-19 and curriculum policy manager at the Association of Colleges (AoC), said: “Colleges have long recognised the critical nature of good careers education and will be keen to continue to work together with other education providers to support young people to make informed choices.”

David Igoe, chief executive of the Sixth Form Colleges’ Association, said: “The identification of ‘cold spots’ is welcome in targeting scarce resources to where support is most needed.”

Bids for a slice of the £5m fund must be submitted by December 4.