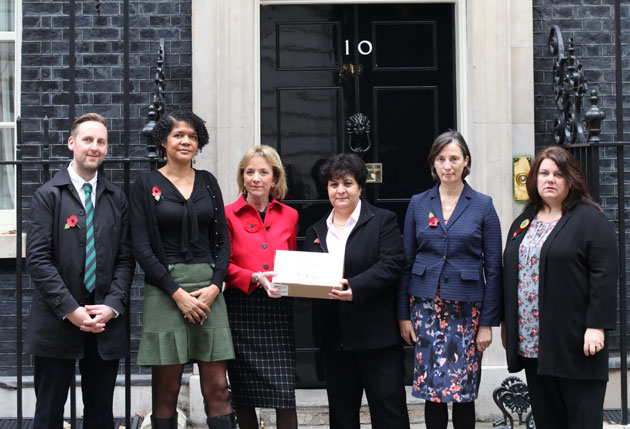 A petition signed by more than 10,000 people that called on the government to “stop further funding cuts to adult education” has been delivered to 10 Downing Street.

Shadow Minister for Culture and the Digital Economy Chi Onwurah was joined yesterday (October 29) by five members of the Workers’ Educational Association (WEA) when presenting the petition at the home of Prime Minister David Cameron.

It was part of the Save Adult Education campaign launched by the WEA on September 28.

Mr Onwurah said that she was backing the campaign because “adult education is important — it helps individuals and their families break cycles of deprivation and forge better lives themselves”.

“For many people living in low-income communities, adult education is a lifeline which helps them get the skills they need to get on in life,” he added.

Chief executive of WEA Ruth Spellman, who was among the group that handed over the petition, said it was important to pile pressure on the government to limit FE spending cuts, ahead of next month’s spending review announcement, because “everyone deserves a second chance back into learning”.

“It is essential for our economy and society that we continue to provide high quality education for adults,” she added.

It comes after hundreds of staff and students from FE colleges descended on Parliament in June as part of another campaign against funding cuts to adult education.

It has been estimated, as reported in FE Week, that the ASB has been reduced by 35 per cent since 2009, and funding for adults over the age of 19 on non-apprenticeship courses is set to be slashed by up to a further 24 per cent in 2015/16, as was announced in March.