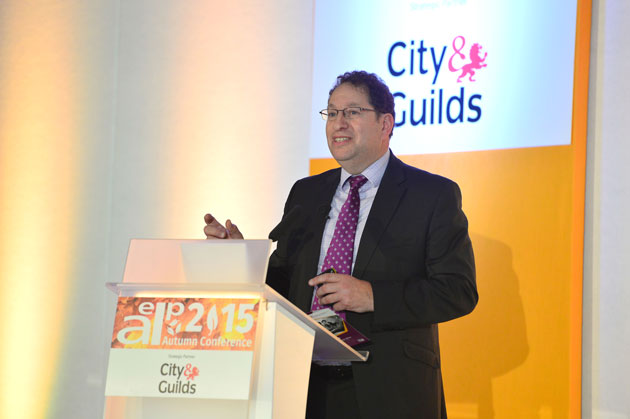 The Association for Employment and Learning Providers’ (AELP) chief executive Stewart Segal has hit back at Ofsted for criticising “floor mopping and coffee making apprenticeships” that he says don’t exist.

Ofsted’s long-anticipated report in apprenticeships, which FE Week was shown a sneak preview of over the weekend, will be highly critical of apprenticeships for not giving trainees the skills and knowledge needed by employers.

Speaking at the AELP Autumn Conference at the Ricoh Arena, in Coventry, today (October 20), Mr Segal said: “It was very frustrating to see the Ofsted report that talked about floor mopping and coffee making apprenticeships.

“There is no such thing, and it was wrong that they used those examples.”

The danger, Mr Segal (pictured above) went on to say, was that by “raising these issues you don’t address the real issues, which is a problem”.

The results of the inspectorate’s inquiry into apprenticeships are not due out until Thursday (October 22) — but an Ofsted spokesperson gave FE Week an advanced taste of its findings, as reported on Sunday (October 18).

She said it would warn that “the growth in the number of apprenticeships over the last eight years has diluted their quality”.

“These low-level apprenticeships are particularly common in service sectors, like retail and care, and do not provide sufficient training that stretches the apprentices and improves their capabilities.

“Instead, they frequently are being used as a means of accrediting existing low-level skills, like making coffee and cleaning floors,” she added.

“There are bad behaviours – there’s no doubt about it,” he said.

“There’s no point coming in and saying there isn’t. There is stuff going on that shouldn’t be going on and it does sully the whole brand,” he added.

Mr Hughes went on to say that the idea put forward by Skills Minister Nick Boles that employers themselves would drive out bad practice by other employers, was “balderdash”.

Instead, he said, the AELP had the opportunity to “highlight the good stuff, but also shine a spotlight on where it’s going wrong.”

Carl Creswell, deputy director for apprenticeships at the Department for Business, Innovation and Skills, said that much had already been done to improve apprenticeship quality, but acknowledged there was still a lot to be done.

Chief inspector Sir Michael Wilshaw is preparing what Ofsted has described as “a hard-hitting speech” to launch the report at a CBI event in Solihull, in the West Midlands, on Thursday.

He is expected to warn against further undermining of the apprenticeships brand and say that, despite increasing numbers as the government aims to hit its 3m target by 2020, very few apprenticeships are delivering professional-level skills.