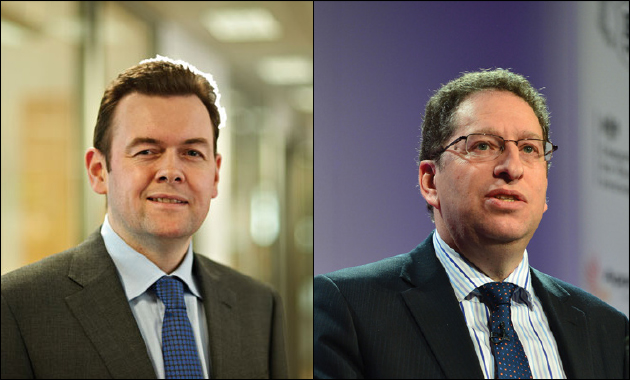 The Confederation of British Industry (CBI) has hit out over fears that companies and providers could be hit by costly new apprenticeship exams with big awarding organisations (AOs) yet to say what they’ll charge.

In an exclusive interview with FE Week Neil Carberry (pictured above left), CBI director for employment and skills, said businesses had been increasingly concerned about rumoured end-point assessment costs.

Three AOs have so far been approved by the Skills Funding Agency (SFA) but none has so far set a price.

And Association of Employment and Learning Providers (AELP) chief executive Stewart Segal (pictured above right) has gone even further and cautioned members, saying they “should be aware of the cost of assessment before they take on any new starts”.

Mr Carberry said: “What is important is giving businesses and providers clarity as soon as possible on the new assessment system and associated costs.

“Companies are concerned that assessment costs for trailblazers are proportionate.

“We have been getting more worried that government inspired end assessment criteria are driving up costs for trailblazers.”

It comes with provisional government figures this month showing 400 starts under the new standards in 2014/15.

Each Trailblazer group has to include an estimate of costs when they submit their assessment plans — but this information is not published.

However, a number of published assessment plans include some reference to potential costs.

The level three electrician standard includes an AM2 test which “will be approximately £700”.

Meanwhile, the Tech Partnership, the employer-led network behind both the network engineer and software developer Trailblazer apprenticeships said in its assessment plan that “our aim is that assessment costs will be 10 to 15 per cent of the total cost of the apprenticeship”. This would give a “direct cost of assessment of three days of assessor per apprentice”.

Terry Fennell, group operations director at the Food and Drink Training and Education Council Group of Companies, told FE Week that the Butchery Employer Trailblazer group had estimated the end point assessment cost for the butcher standard to be around £600.

Despite the uncertainty over assessment fees, providers are expected to include costs when claiming funding from the SFA.

A City and Guilds spokesperson told FE Week: “We are still working with trailblazer groups to decide the pricing structure for end assessment apprenticeships.”

A spokesperson for Pearson said it was “too early at this point” to have information about how much they would charge.

An OCR spokesperson said: “It’s too early to say what OCR will be charging as nothing has been finalised.”

I agree with Stewart

This week Sajid Javid, the Secretary of State at the Department for Innovation and Skills (BIS), told the select committee he felt it necessary to support the introduction of an apprenticeship levy because the new ‘higher quality’ standards were more expensive than the current frameworks.

Cheap portfolios with tick box assessor observations are out, to be replaced in many cases by attendance at an approved test centre.

This new end point assessment, in the case of the network engineer standard for example, will last a full week at a test centre.

Significantly upping the cost of assessment isn’t necessarily a bad thing. If employers see a real value from any corresponding increase in the quality of training and rigor of assessment to achieve a pass, merit or distinction.

But it raises some important questions, such as; how can providers responsibly negotiate fees with employers if they don’t know the cost of assessment? If only one assessment organisation gets approved for a standard what is their incentive to offer a competitive price? And, who will pay for the apprentice travel and accommodation for assessment centres and who will pay for expensive assessment resists if the learner fails to attend or pass?

Steward Segal, the chief executive of the AELP, is right.

Providers need to down their trailblazer tools and stick to the current frameworks until these questions are answered.