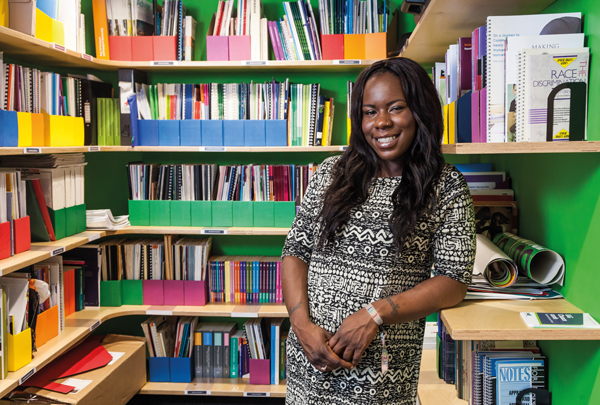 Shakira Martin’s first brush with national politics came as something of a surprise — in fact, she didn’t even know it had happened.

In March last year, Martin was a newly-elected member of the National Union of Students’ FE and society and citizenship zone policy committees attending a work summit.

“There was a panel and it was the normal panel — white men in suits, maybe the occasional woman — so I put up my hand and  I asked this man a question,” says Martin, the surprise victor in April’s NUS vice president for FE election.

“I said something about ‘How are you going to build a representation of colleges?’ or something, and the guy, he replied, but he really didn’t answer the question. “But then afterwards I started getting phone calls and texts saying: ‘Well done, Shakira!’ and I didn’t understand why — I just asked a man a question.”

The man, it turned out, was then-Business Secretary Dr Vince Cable.

Martin only discovered this when she happened to mention the incident during a phone call to her cousin on the bus home — and when she did, she wasn’t impressed.

“If I knew he was that person he wouldn’t have got away with answering the question like that,” she says, tartly.

The past couple of years have been a steep learning curve for Martin, she admits.

“At that time I wasn’t NUS-shaped. I was just going in raw,” she says.

“Now it’s more difficult — since I’ve got this title, it’s like people listen to me. I’m saying the same things as I did when I was just Shakira, but because I’ve got this platform, people take it more seriously. Shakira Martin speaking at the NUS conference in April

“But on the other hand, now I know how to talk to my members and my audience, I phrase things differently now — but I don’t want to lose the authenticity of what I’m saying.”

When Martin, aged 27, was elected to the vice president role in April, the former Lewisham Southwark College student vowed to put FE centrestage in the NUS — where discussion can be dominated by higher education — and her experience of education is one many in the sector will recognise.

“I hated school,” she says.

“Well, I loved school when I got into Year 7, but then when I got to Year 8 there were barriers preventing me from reaching my full potential, as I wasn’t in the same position as some of my peers.”

Martin grew up in Lewisham, a borough with one of the highest child poverty rates in London, with mum Juliet.

“Growing up in a single parent family and being on benefits, it just makes things much more difficult,” she says.

“I never used to bring home those letters to my mum, like the trips to France and stuff like that, because I wouldn’t want to put them in a tough position.”

As a result, Martin began skipping school and was “disruptive” when she was there.

“I didn’t know why I was there, it wasn’t relevant,” she says.

A fortnight after her 16th birthday, Martin moved out into shared council accommodation.

Shortly afterwards, she left school with one GCSE — a B in RE — and moved to the now closed Crossways Academy sixth form to do a business studies course.

“I went there because I was just following friends,” she says. “I didn’t have any aspirations or any end goal, and I dropped out of that course in the first six to 12 weeks.

Next, Martin enrolled at Bromley College for a legal secretary course, following in the footsteps of an aunt she’d “always looked up to”.

“I thought I liked it but then one week turned into one month and then you’re late, and winter comes and the weather, and the same thing happened again.”

For each of the next two years, Martin enrolled on a social science at Morley College, but once again, winter came and Martin stayed in bed.

“I didn’t understand why I was dropping out of so many courses because I thought I had an interest in it,” she says.

However, while this was going on, Martin got her first paid job at a doctor’s surgery in Camberwell.

“I really enjoyed it,” she says. “I loved the community spirit of it, the types of people, the challenge of working within a diverse range of people within the NHS.”

Martin decided she wanted to be a practice manager, but was astounded when one of the doctors told her she could make it — in 20 or 30 years.

“I was thinking, I could be a doctor three times over and you’re telling me I could be a practice manager in 30 years?” she says.

“I wasn’t disheartened, in fact, I thought, ‘let me tell you, I’ll get there in five’.”

So, following the birth of her first daughter, Kaishay, Martin headed back to college, this time at Lewisham Southwark to study a level three leadership and management course, and vowed to see it through — which she did, winning student of the year award for the course.

“It all started to make sense for me,” she says.

“I felt like I was being fed, like I was going home full and it was relevant.”

A job in a development and learning consultancy led to more courses — a 12-week Preparing to Teach in the Lifelong Learning Sector course, which Martin completed despite giving birth to her second daughter, Kiara, two days later, followed by a level five diploma in education and teaching. Shakira Martin on a demonstration outside Lewisham Southwark College in July

One day at college Martin noticed a poster for the election of the student union women’s officer.

“I had done a few courses about confidence and communication, those type of things, and I was feeling really empowered,” she says.

“And I realised that, as much as I was a victim I was also a survivor in my own right.

“I wanted to go out and empower other women to understand the importance of knowing their value and their worth and stuff like that.

“So when I saw the poster — I didn’t know what student union was, I just saw ‘women’s officer’ and I was like: ‘Right, that’s what I want to do’.”

She won the position and the following year she won the presidency of the college union and was elected into the zones, where she had her encounter with Dr Cable.

Her move into politics was, she believes, therefore “accidental really”.

“I’ve never been political, but I’ve gone from watching Jeremy Kyle to BBC Parliament and finding it interesting — I’m like, ‘whoa, I’ve changed’,” she explains.

But she says, her politics remain shaped by her upbringing in what she only semi-jokingly calls “the ghetto”.

“So for me, in my role, I’m in a national position and I have the ears of people, decision-makers and stuff like that, but I think it’s important for me to let people know within the sector that I’m adaptable,” she says.

“So when things go down, I’m ready to be at the front of the line, shouting, protesting, occupying, doing whatever I need to do, but I can also articulate myself around a board table.”

And it’s this active view of politics which she brings to her plans to fight for FE.

“Everyone is talking about FE at the moment — but don’t do it because it sounds good because your actions aren’t going to show,” she says.

“FE is a very bespoke institution where the diversity and the experience and the negative and positive things that the students bring need to be understood by the decision-makers. Because if it’s not relevant to the people what’s the point in us wasting time, resources and money?”

Within the NUS, she says, the lack of focus on the 4.1m of the 7m members who are in FE is “frustrating, and almost insulting” she says.

“My overall big piece of work that I want to do is to build student unions within FE colleges. I believe that’s what got me involved, and it allowed me to link my personal and social issues and realise how policy is important,” explains Martin.

“So I want to develop student unions across the FE sector, but also in sixth forms and apprenticeships.”

This work within the NUS, she hopes will lead to “a domino effect of getting FE recognised in society”.

“It’s about general conversations that people have. I want secondary school and Year 11 students to be excited about going to college and not going because they got a U,” she says.

“People like me don’t normally get this type of opportunity so I am going to do what I can to save FE.”

Who Moved My Cheese by Dr Spencer Johnson. I’m not really a big reader, to be honest, but what I did find about the book and it was really easy to read. It was quite descriptive, so you could imagine it yourself. I like that you can read it again and again and get something different from it each time. It’s about anticipating change

People that tell lies. I hate lies. Also, my family is from Jamaica and there’s a saying there — Duppy know who fi frighten — which means people take advantage of the people that they think that they can do.

So at certain times in my life, or in situations that have arisen, it kinds of gets me more agitated, because I’m like: ‘You’re only doing that because you think you can get away with it.’ And that’s a pet hate

If you could invite anyone living or dead to a dinner party who would it be?

My grandma. Her name was Cochita. I would ask her a load of questions I didn’t get to ask her when she was alive – I was 10 when she died, so I was still young. I’d like to get some history and for her to see who I am now

I wanted to dance for Destiny’s Child. And then I realised there was no money in it, and then they broke up. So I used to like dancing