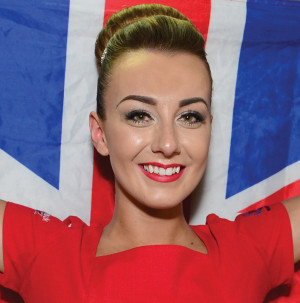 After a double celebration for being crowned the world’s best beauty therapist and making Team UK history for achieving the highest score at this year’s World Skills competition in Sao Paulo, Rianne Chester can’t hide her beaming smile.

The former Warrington Collegiate student took some time out amid the excitement of the TeamUK welcome home event in London to speak to FE Week about her road to success.

Rianne, aged 22, finished secondary school in 2009 with an impressive array of GCSE grades and her teachers wanting her to go follow an academic route that would lead her to university.

Undecided as to what to study and feeling pressured to go university, Rianne turned to her family for advice. They suggested that she might enjoy going into FE to study beauty therapy as they believed she was creative and would shine in the profession.

“At the time beauty therapy was just not an option for me. However, I thought I would go to a beauty induction day at Warrington Collegiate and that was it – I was in love with it from there on,” she recalls.

“I can’t imagine doing anything else now.”

The aspiring beauty therapist started the college in 2011 where she was placed into the mature class after quickly picking up the tricks of the beauty trade.

“I started off in the 16 to 19-year-old class, but my tutors wanted me to go with the adult learners, because that class was progressing a little bit more and picking up things a little bit faster,” she says.

As Rianne was enjoying her studies and impressing tutors during her level two course in beauty therapy, the college put her forward to compete in a regional beauty competition. However, Rianne explains that it was not all plain sailing at first as she was unsuccessful in achieving any medals.

But this didn’t stop the ambitious student from advancing her skills and obtaining a level three qualification in beauty therapy and going on to win a silver medal at her next regional competition, the EuroSkills in Lille last year.

“From there I was invited to compete in the nationals but I didn’t get anything from there either,” she says as her smiles widens and she starts to laugh.

But this year, Rianne’s hard work paid off as she made it through to the WorldSkills 2015 competition in Sao Paulo, winning both a gold medal and being honoured with the illustrious Albert Vidal Award for scoring the greatest number of points among all competitors from every nation and region taking part — making Team UK history by being the first British competitor ever to win the award.

I thought I would go to a beauty induction day at Warrington Collegiate and that was it – I was in love with it from there on. I can’t imagine doing anything else now

But how did she get involved with WorldSkills?

“It was actually one of the WorldSkills talent judges that scouted me and gave me a call a few months later to see if I wanted to try out the competition back in 2010,” she says.

The determined beautician has received huge support from her family and friends throughout her journey to WorldSkills 2015.

She explains: “I’ve competed for five years — usually the cycle is only two-and-a-half years — but I’ve done two cycles so I’ve done it for five. So it’s been a really long process but the support I have had has been brilliant.”

WorldSkills has had an enormous impact on Rianne and has been an experience that has brought her out of her shell and has been a springboard for progressing with her career.

“It’s given me so much more confidence. I used to work in a salon but I decided to open my own business last October, so it has completely changed my life — but obviously in a very good way,” she says.

“Traveling and getting to meet all kinds of people has been such a great experience because I used to be quite shy when I was 17 and I wouldn’t really speak to anybody new.

“And then having to travel on my own and meet different people has just completely changed my whole perspective on life.

“Now I’ll go anywhere, do anything and speak to anyone, which is something if someone told me at 17 I would never have believed them.”

Rianne describes her journey to Sao Paulo as being such a great opportunity and she was filled with the excitement and anticipation of being part of the vibrant atmosphere while working her hardest to try and achieve top marks in each competition round.

“The atmosphere at the opening ceremony was absolutely spectacular. We knew the carnival atmosphere was going to be amazing but we didn’t actually expect it to be that good,” she recalls.

To win her gold medal Rianne had an intense four days of competing which included carrying out a spa body treatment, manicure and pedicure, French gels with evening make up, full body fancy makeup and nail art, and a specialised massage.

When Rianne’s results were announced on the night of the closing ceremony for not only the gold medal but the Albert Vidal Award she was truly overwhelmed.

“It was ridiculous. I wasn’t expecting a gold medal to be completely honest, yet alone the Albert Vidal Award,” she says.

Since returning home after her outstanding achievements, Rianne reflects on how taking the FE route has, she says, made her the person she is today.

However, she does believe that people can still be narrow-minded in their views on vocational learning and she wants to find a way to make WorldSkills known to a wider range of people.

“A lot of people — especially when you talk about the beauty industry — tend to have that general view that you go to college for that ‘easy option’,” she explains.

“People aren’t really broad-minded when they actually think about the different career paths you can take within beauty therapy.

“If they actually take a minute to think that vocational skills are what makes the economy grow, and what makes the country what it is now then the stigma could be dropped.”

“It feels like FE courses are taken for granted and people seem to think doing something academic or studying law is the job to be in, when in reality there are just as important careers which bring just as much, if not more, to our economy,” she adds.

With the confidence and success competing has given Rianne, she decided to leave the salon she worked at to set up her own mobile beauty business, which is called Beauty by Rianne.

“Last year I decided it was the right time to open my own business,” she explains.

“At first it was more of a sideline and WorldSkills was my main focus, but now I’m home I can look into settling down in one main area and expanding the business.

“After having something as amazing as WorldSkills in your life, you don’t really want to go back to a normal life as you always strive for that little bit more.”

Rianne is so pleased that she steered away from the pressure of going into higher education and went on to achieve success by following her creative passions and run her own business by the age of just 22.

She ends the conversation reflecting on WorldSkills and says: “If competitions were more advertised and well known to the public  then people might have a different view on FE and it might inspire more people to study vocational subjects and change their way of thinking that to be socially accepted they don’t have to have a high-flying academic career.