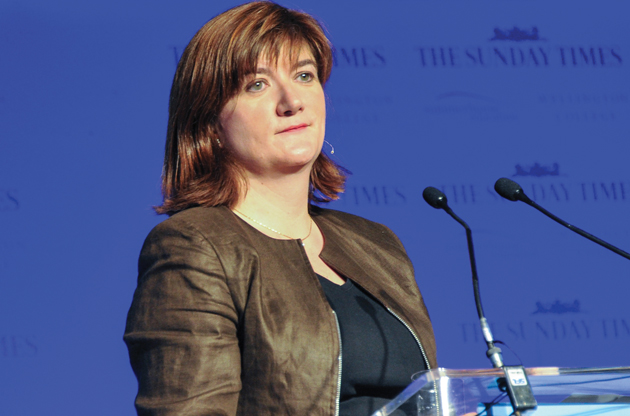 She made the comments during a meeting of the House of Commons Education SelectCcommittee on Wednesday (September 9), during which she faced a grilling from MPs over her department’s policies.

The issue of funding in the FE sector was first mentioned by Gateshead Labour MP Ian Mearns, who said there was a “looming concern” about a funding crisis in FE, with “possibly 10 to 15 per cent of the sector facing significant deficit budgets within the next 18 to 24 months”.

Ms Morgan said: “We are aware that the FE sector is, I think fragile is probably the way to put it, and that’s why we have started a process of these area-based reviews, looking at provision in local areas and making sure that we can help colleges to be robust, in the best of financial health.

“But [we also want] to make sure there is no over-lapping provision, that people are working together, that actually if colleges need to get bigger in order to be stable, that’s the sort of thing that we want the colleges and the areas, as I say, to be thinking about together.”

Asked if she agreed the area reviews were “flawed” because they only compelled general FE and sixth form colleges to be involved and not school sixth forms, Ms Morgan said she would encourage “all post-16 providers” to take part, but that a “particular issue” with FE institutions had been brought to her department’s attention.

Ms Morgan said she would “strongly urge” colleges and schools to “work together” as part of the reviews, and said both she and Skills Minister Nick Boles were “in the market” for hearing proposals from areas.

The education secretary was also pressed on whether funding for 16 to 19-year-olds could be brought in line with funding for the 14 to 16 stage, but said funding was currently being reviewed as part of the government’s spending review, the findings of which are due this autumn.