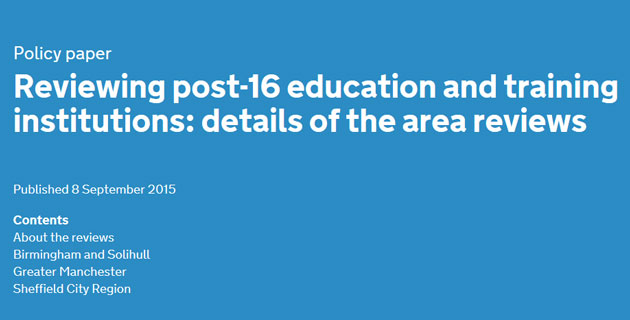 Twenty two general FE colleges will be involved in the first round of post-16 education and training area reviews announced by the government this morning.

The future of a further 16 sixth form colleges (SFCs) will also be assessed as part of the reviews taking place in Birmingham and Solihull, Greater Manchester, and Sheffield city region.

It comes as the Department for Business, Innovation and Skills (BIS) and Department for Education (DfE) also finally published its guidance on the review process for post-16 education and training institutions. A version of the guidance had already been leaked to FE Week.

Each review will start with an assessment of the economic and educational needs of the area, and the implications for post-16 education and training provision, also including school sixth forms and independent learning providers (ILPs).

A BIS and DfE spokesperson said: “The reviews will focus on the current structure of FE colleges and SFCs, although there will be opportunities for other institutions [including schools and independent providers] to opt in to this stage of the analysis.”

Dr Collins will chair the Birmingham and Solihull, and Sheffield City Region local steering groups, which will meet for the first time on September 18 and 28 respectively.

The Greater Manchester local steering group, which will be chaired by chief executive of Trafford City Council Theresa Grant, will meet for the first time on September 21.

The BIS and DfE spokesperson said that the collective approach was “designed achieve a transition towards fewer, larger, more resilient and efficient providers, and more effective collaboration across institution types.

“A critical aspect will be to create greater specialisation, with the establishment of institutions that are genuine centres of expertise, able to support sustained progression in professional and technical disciplines, alongside excellence in other fundamental areas — such as English and maths.”

It comes after five FE and sixth form colleges facing “significant financial challenges” announced on July 21 that they are “actively considering” collaboration plans, following a review of post-16 provision in North East Norfolk and North Suffolk.

The colleges involved in the reviews are yet to comment.