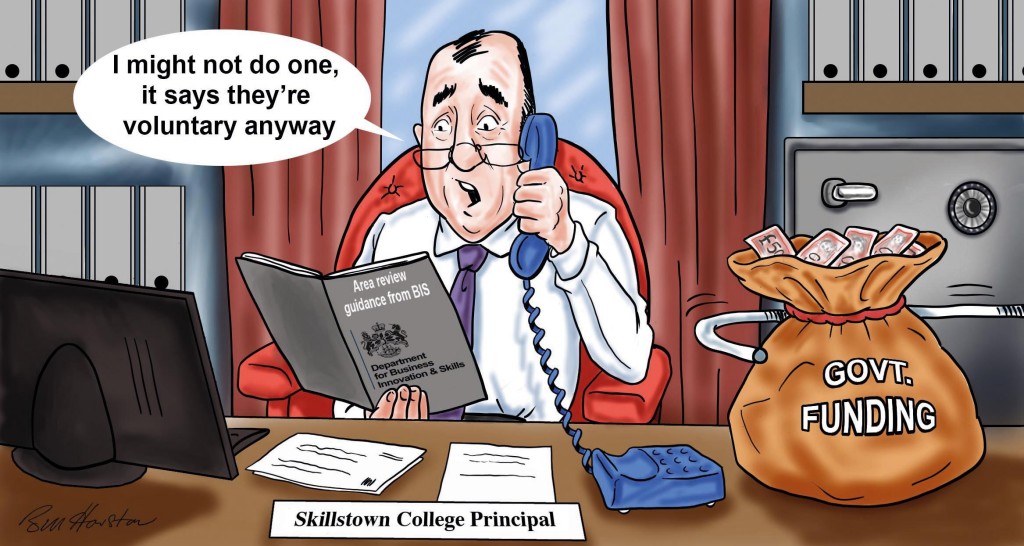 Council and business leaders have remained tight-lipped over financial support for college mergers as the FE sector continues to wait for guidance on proposed post-16 area reviews.

Guidance on the reviews, which were announced in July, was due to be published last month, but at the time of going to press had only been seen in draft form in a document leaked to FE Week.

The draft guidance places responsibility for the funding of mergers and other changes recommended following the reviews on colleges, local enterprise partnerships (Leps) and councils, with a threat that skills funding could be withdrawn from providers which do not “take action” as part of the programme.

The document, authored by Skills Minister Nick Boles, says: “We will expect colleges, Leps, local authorities with relevant devolved skills budgets to provide funding and support to implement changes, particularly as we expect change to deliver significant net savings in the longer term. Government finance would need to be provided as a last resort.

“While participating in these reviews and implementing their recommendations is voluntary, recognising the independent status of colleges, I strongly urge every college to take part.

“As confirmed in the policy statement, ultimately we would expect funding agencies and Leps to only fund institutions that are taking action to ensure they can provide a good quality offer to learners and employers, which is financially sustainable for the long term.”

Dr Ann Limb, chair of the South East Midlands Lep, said: “As government guidance on area-based reviews has not yet been published it is premature to speculate on how any changes resulting from the reviews might be funded.

“Leps and FE colleges serve the local communities in which they are located and it is therefore likely different solutions will be found for different areas.

“In the South East Midlands, I am confident that we will work collaboratively with our excellent colleges to implement the findings of the area-based review once it has been completed.”

But Dr Mary Bousted, general secretary of the Association of Teachers and Lecturers (ATL), said it was “totally unrealistic” to expect colleges to foot the bill for the reviews, which she described as being “forced upon the sector by the government”.

She added: “Colleges have absorbed cuts of 35 per cent to their funding since 2009, and from September 2015 are losing an additional 24 per cent of their adult learning budgets, as well as being expected to find nearly 4 per cent of savings within this academic year.

“If surplus funds are available within college budgets, they should be spent on educating and developing the skills of local young people and adults, not responding to the whim of a Government pursuing an ideological agenda.”

Association of School and College Leaders general secretary Brian Lightman said: “The last thing colleges need is a further funding pressure at a time when funding levels are so low that many colleges are struggling to maintain basic levels of provision.”

No one from the Local Government Association was available for comment. See feweek.co.uk for more on the leaked area review guidance.