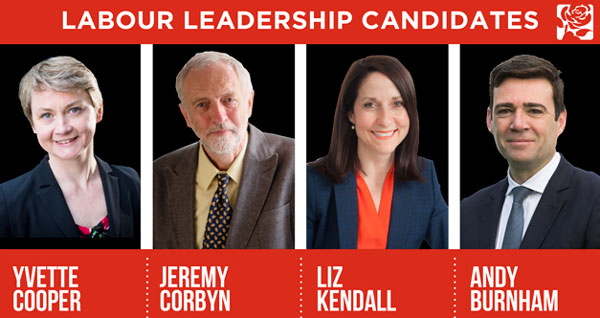 The Labour leadership candidates have spelled out what their FE priorities would be up to the next general election and beyond.

Voting is set to close on September 10, two days before one of Jeremy Corbyn, MP for Islington North, Andy Burnham, Shadow Health Secretary, Yvette Cooper, Shadow Home Secretary, and Liz Kendall, Shadow Minister for Care and Older People, will be announced as the winning candidate at a special Labour conference.

With concern mounting over FE funding cuts and apprenticeships looming large as a key issue over the lifetime of the new parliament, when Labour will need to hold the government to account over its target for 3m starts by 2020, FE Week asked them to set out their visions for the sector.

Each of the candidates stressed their firm commitment to FE and skills training in exclusive personal statements uploaded today onto our website’s FE Experts section.

But none of them committed to Labour’s pledge ahead of the May 7 general election to scrap apprenticeships of less than two years’ duration and below level three, which came in for widespread criticism among sector leaders.

The clear bookies’ favourite Mr Corbyn, with Bet 365 today, for example, offering odds of 4/11 and Paddy Power 2/7, said that an expansion in adult learning should be funded by raising coporation tax.

“In 2020, we should start by reversing the cuts to the adult skills budget and expand it into a lifelong learning service by adding 2 per cent to corporation tax (still comfortably the lowest in the G7),” he said.

“This funding would be hypothecated to expand adult learning into a lifelong learning education resource.

Mr Corbyn also called for colleges to work more closely with Jobcentre Plus to help unemployed people onto the right training courses.

The second favourite with most bookies is Mr Burnham, with Bet 365 today, for example, offering odds of 10/3 and Paddy Power 7/2.

He said that he would propose a “reformed funding model for post-18 education, looking at a progressive graduate tax to replace tuition fees for university, and extend support for apprenticeships”.

Mr Burnham added: “If I’m elected leader, I will propose a national Ucas-style system for apprenticeships — one that all providers have to use — and extend access to student finance to help people to move to take up an apprenticeship.”

Learners can currently apply for some apprenticeships directly through Ucas Progress, but it is not compulsory for all providers to use the service.

The third favourite overall is Ms Cooper, with Bet 365 today, for example, offering odds of 15/2 and Paddy Power 9/1.

She called for businesses and the public sector to play more prominent roles with apprenticeships.

“We had a policy before the election of giving more control over the funding to business in return for more, higher quality apprenticeships, but I think we need to do more to develop that with business directly and to make that a real proposition,” she said.

“The public sector needs to pull its weight too — too many government departments and agencies are very poor at employing apprentices and we need to do better.

“More public contracts should specify the need to create apprenticeships.”
Ms Cooper added that she wanted to see “a revival in our FE sector — playing a real role in ensuring that young people and people of all ages can access high quality flexible education”.

She looked to the continent for inspiration for vocational training reform.

She said: “If you look at Germany, for example, apprenticeships there are generally likely to last longer and be of a higher quality.

“We have to make sure that Britain can support people to get training to a similar extent.

“We have to make sure apprenticeships are there are there for young people as well as older workers; and that small businesses are able to employ apprentices as easily as large firms.”

She added that trade unions are “well placed” to play an important future role in defending the rights of apprentices.

“Building a fairer, more equal and prosperous society must be the aim of the next Labour government,” she added.