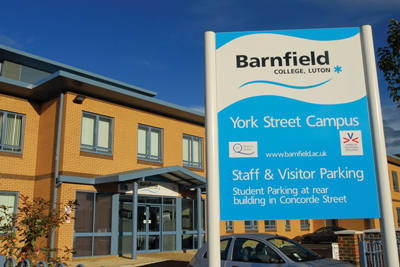 Barnfield College has come under fire for spending public money on a sponsorship deal with its local football team.

The college was forced to defend itself when Luton Town football club fans took to social media to express their anger after the college was revealed last week as the sponsor for the club’s shirts for the 2015/16 season.

The college has had a financial turbulent history in recent years. After the departure of former principal Sir Peter Birkett in 2013, when financial irregularities were discovered, the college was judged inadequate for financial control by the Skill Funding Agency, and was slapped with a grade four from Ofsted this January.

Another user, @Drew_Freeman, wondered “where Barnfield are getting this money from to sponsor Luton” while @danny_buckley_ described the deal as “bizarre”.

Neither the college nor the club have revealed how much the deal, which replaced a previous arrangement with Luton-based budget airline easyJet, was worth.

However, director of education PR company Empra, Ruth Sparkes, told FE Week the deal might have been a worthwhile investment.

She said: “Working with sports organisations, whether that’s through sponsorship or other methods of collaboration can be a very good idea for colleges, but, only the college will know whether it can afford to do so, or what the Return on Investment is.

“Sports can often be a way to engage very hard to reach students and their families. I’m talking about students who would never go to an open event, or call the college or ever think that college was for the ‘likes of them’.”

She added: “Sponsorship, like all forms of advertising costs money, the cost needs to be balanced with the visibility, brand awareness and PR that can be harnessed from the deal — local teams are very important to their communities, and that might be attractive leverage for a college or training provider.”

She said: “Any money which has changed hands as a result of the sponsorship was already set aside as part of the marketing budget.”

She added the college’s marketing budget for the year was “within the sector norms”.

Luton Town Football Club declined to comment on the backlash against the deal.

In a statement on the website announcing the new sponsor, chief executive Gary Sweet said: “It’s fantastic to have Barnfield on-board.

“With the departure of easyJet as shirt sponsor, we were hoping to be able to enter into a new agreement with an organisation with strong links to the town.

“When Barnfield came forward as a potential sponsor it made perfect sense and we’re absolutely delighted to have them involved.

“Working with Barnfield will help us raise the profile of both the club and the college and will offer huge benefits to the club, its supporters, Barnfield and its students in many other ways.”