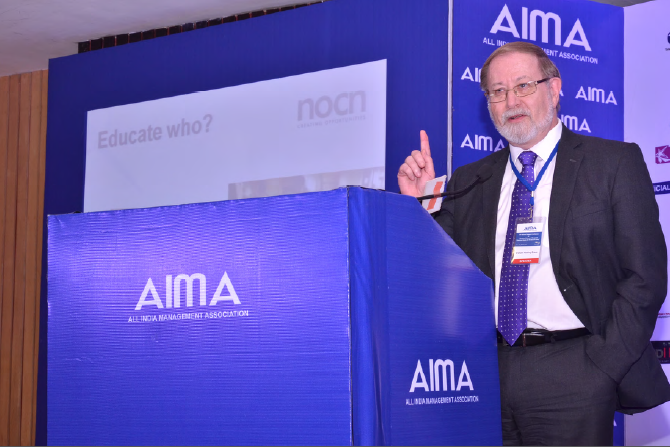 The lure of a new foreign market has temped NOCN to offer management training qualifications in India as it follows the lead of other awarding organisations (AOs) in branching out abroad.

Sheffield-based NOCN has struck a deal with the All India Management Association (AIMA) to provide content, assessment, an IT platform and certification support.

Delivery of courses will be carried out by AIMA, but NOCN will also certificate some of AIMA’s existing courses, beginning with its trainer programme.

Graham Hasting-Evans, NOCN managing director (pictured above), said: “We are delighted to support AIMA in its ambitions to raise the professional standards of Indian managers.

“This will improve productivity and quality, strengthening the Indian economy.

“This partnership between AIMA and NOCN is really exciting and we are proud to be part of the Indian skills revolution.”

The qualifications will be designed to comply with India’s National Skills Qualification Framework (NSQF), but a statement from NOCN and AIMA said their collaboration could be extended to other countries.

It added that they expected to enrol around 5,000 learners in the near future.

Director general of AIMA Rekha Sethi said: “Management and entrepreneurship training is rare in India’s skills market and NOCN will collaborate with AIMA in assessing and certifying these skills.”

AIMA also plans to use the collaboration to develop a Professional Manager Recognition System to provide internationally valid joint accreditation to Indian managers at trainee, manager and senior management level.

However, NOCN is not the first UK-based AO to venture abroad.

In May, AQA announced it was joining with the Oxford University Press to create a set of international GCSE and A-level qualifications initially aimed at schools in the Middle East, but with plans to expand further.

Andrew Hall, AQA chief executive, said at the time the partnership and new qualifications presented “a real opportunity to provide something which really responds to the needs of international educators and will enable us to share the UK’s strong educational values and best practice internationally”.

Pearson, which operates as an AO as part of the larger multinational company Pearson PLC, has long had an involvement in the international market, offering its qualifications in range of countries.

A spokesperson said: “We believe it is vitally important for awarding bodies to have an international outlook.”

She said international work had allowed them to improve UK qualifications, by allowing experts to compare them to the best in the world.

And in 2009, City and Guilds formed MCG — a joint venture with Indian company Manipal Global Education — and has signed a deal with Indian Government’s National Skill Development Corporation (NSDC) to train 63,000 people over ten years in construction, hospitality and retail and an additional 77,000 people in other sectors, as part of the Indian government’s aims to upskill 150m people by 2022.