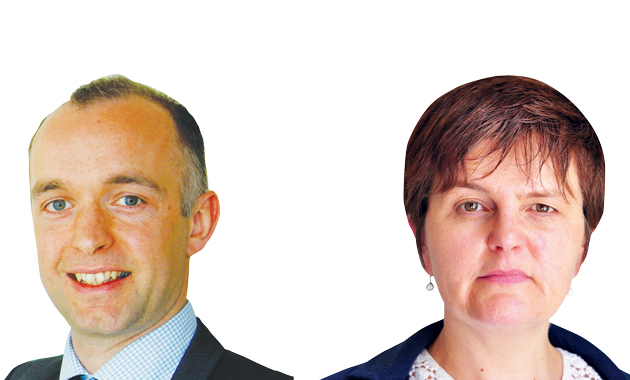 Further education providers have been warned they could be left with a bill for greater numbers of compulsory English and maths learners as the new numbered GCSE grades regime makes it harder to achieve a pass.

Under a condition of Department for Education (DfE) funding, providers must make 16 to 19 learners who have not achieved at least a C in English or maths resit until they pass.

But the current system’s C grade is partially the equivalent of a four under the new system and that won’t be enough for a ‘pass’.

It has prompted warnings of even more 16 to 19 English and maths learners who must continue to study to get the more difficult ‘pass’ grade.

Indeed, research by FE Week sister newspaper Schools Week has discovered around two thirds of learners who achieved a C grade for maths and English GCSE last summer would be considered to not have passed under the new system — where five will be the lowest possible pass (with nine being the best).

James Kewin (pictured above left), deputy chief executive of the Sixth Form Colleges Association, said: “Making the maths and English GCSEs harder to pass will mean colleges having to find the resources to teach the subjects to a lot more young people post-16.

“It’s going to be a case of FE having to pick up the pieces for failures with teaching in schools.”

However, a DfE spokesperson said FE providers would, up to the end of 2018/19, only have to teach maths and English to 16 to 19 learners who hadn’t reached grade four, to give “time to adjust”.

Education Secretary Nicky Morgan (pictured right) announced on June 15 that five would be a “good pass” under the new GCSE grading system. And Ofqual has indicated that a grade five would only be awarded to the top third of pupils achieving the current C grade — so learners who previously achieved a middle or low C would have got a level four, and so not passed.

Catherine Sezen (pictured main, right), senior policy manager for 14 to 19 and curriculum at the Association of Colleges, said: “What’s particularly concerning is the plans to align the new GCSE good pass with the 16 to 19 English and maths funding condition for colleges.

“While this will be a phased approach, the detrimental effect this could have on college funding is worrying.”

Dr Lynne Sedgmore (pictued below), executive director of the 157 Group, said: “This announcement will undoubtedly add to the well documented challenges that colleges are facing in implementing policy around English and maths.” The Schools Week research, which focused on learners who sat GCSEs last summer only, showed that 27.3 per cent of learner grades were C for English — but under the new numerical grading rules, only a third of these (9.1 per cent) would have achieved a grade five.

In maths, 30.4 per cent of students received a C grade. However, Schools Week found that only a third of these (10 per cent) would have received a grade five.

The DfE spokesperson said: “From 2019/20, we intend to align the funding condition with the new good pass at grade five.”