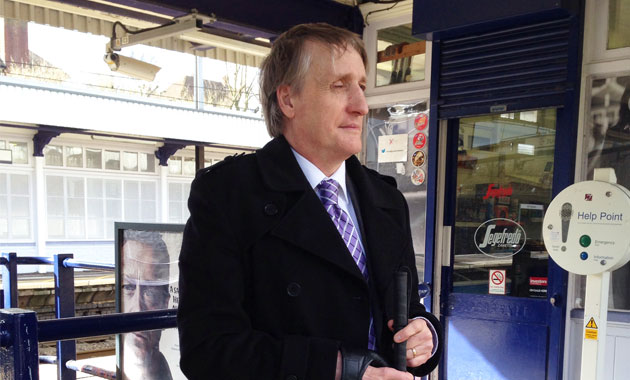 Lewisham Southwark College discriminated against a blind employee by failing to make reasonable adjustments to help him do his job, an employment tribunal has ruled.

It found, last week, that disability officer Michael Lambert (pictured above) had been put at a “substantial disadvantage” to his colleagues after the college refused to give him access to software that was central to his role.

The court ruling said: “It is the unanimous judgement of the tribunal that the claim of disability discrimination is well-founded.”

Mr Lambert, aged 58, said he was “delighted” by the result. A separate hearing to decide upon compensation and remedy is expected, but no date has been set.

“It’s been a long struggle, but I hope that the result will galvanise disabled employees to challenge unequal access to facilities,” he said.

“This result should send a clear message to employers that they need to take requests for reasonable adjustments seriously.”

Employment judge Ian Lamb said the college had failed to respond to Mr Lambert’s requests in a “coherent, logical and urgent manner”.

Mr Lambert, who was involved in an accident at the age off 16 which left him totally blind and started working for Southwark College in 1983 before it merged with Lewisham, requested changes to Spirals software programme which stored student records and allowed them to be shared between staff.

A restructure of his department in 2010 meant that  Mr Lambert workload tripled, leaving him unable to rely on his memory of students’ records.

The software changes would have made the programme compatible with the software he uses, which reads text on a computer screen out loud — without them, he was unable to access the software, which his colleagues said was “essential,” according the court documents.

However, he was told by his line manager that the software changes would be too expensive, and that he did not need it for his role.

And in 2014, three years after he began making requests for changes to the software, a further restructure at the college meant Mr Lambert was invited to apply for the role of disability co-ordinator.

The selection process involved a written test, and despite Mr Lambert’s requests, he was not given advance notice of the test to find out what adjustments needed to be made — and was tested on the Spirals software he had been unable to access.

University and College Union general secretary Sally Hunt said: ‘It’s absolutely unacceptable that the college failed on so many occasions to address Mr Lambert’s needs, and that his personal wellbeing and professional development suffered as a result. The ruling reinforces the need for colleges to swiftly act upon requests from disabled staff for reasonable adjustments.”

Mr Lambert’s barrister, Adam Wagner, said the case offered useful guidance for employers and warned they should consider the needs of disabled employees at the earliest possible stage when thinking of introducing new technology.

“If the issue is technological, then appropriate expertise should be sought to figure out how to make appropriate reasonable adjustments for disabled staff,” he said.

“If the employer fails to make adequate adjustments then that is unlawful discrimination.”

A spokesperson for Lewisham Southwark College said: “As far as the college is concerned, the case is still ongoing and therefore we’re not able to discuss the detail at this stage.

“Out of multiple main points raised as grievances, Judge Lamb ruled in the college’s favour on the majority.

“While any such case is regrettable, Mr Lambert remains in our employment.”