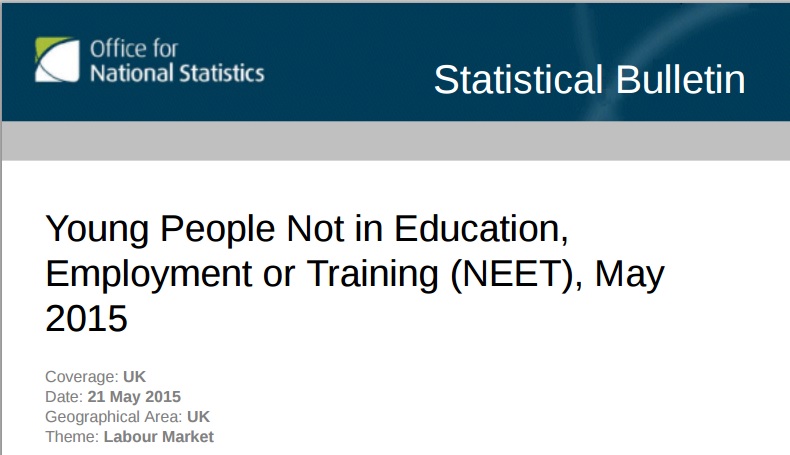 Latest official figures have shown the proportion of young people not in education, employment or training (Neet) in the UK during the first three months of this year was the lowest of any quarter in the last five years.

It meant that 13 per cent of the total number (7,273,000) of 16 to 24-year-olds in the UK were Neet, which was the lowest figure seen during any quarter-period over the last five years, according to the ONS (see below). Extract from ONS Young People Not in Education, Employment or Training (NEET), May 2015

The report added: “Just under half (46 per cent) of all young people in the UK who were Neet were looking for work and available for work and therefore classified as unemployed [during the first quarter of this year].

“The remainder were either not looking for work and/or not available for work and therefore classified as economically inactive.”

Skills Minister Nick Boles said: “These record low rates of Neets demonstrate that our economic plan is working. No young person should be left without the opportunity of a regular wage and high quality training, that’s why we will create 3m new apprenticeships over the next five years.”

The government, which had previously refused to acknowledge the ONS UK figures, has put out its own release using different figures adjusted based on its own rules and covering just England.

It showed that the number of 16 to 24-year-old Neets stood at 738,000 for January to March this year. The figure was lower than for any comparable three-month period over the last five years.

Chris Jones, chief executive of City & Guilds, said: “It’s great that more young people are in education, training, or work, but it’s a tiny victory. We have a long way to go to make sure that no one is slipping through the cracks, especially given the slight rise in the Neet rate among 16 to 18-year-olds.

“One of the best ways to do that is by improving careers advice so that young people are fully aware of their options. That includes using labour market information and the latest data on skills gaps to shape the careers advice on offer. That way, young people can get up to date advice on the industries and jobs that are in demand.

“The Government’s ambitious goal of  3m apprenticeships sends a clear message about the importance of vocational training and is helping to overcome the misguided view that apprenticeships are a choice for those who aren’t ‘clever’ enough for university.

“But a quality teaching and learning experience must underpin each and every one of those three million apprenticeships. That’s the only way they are going to make a lasting difference.”