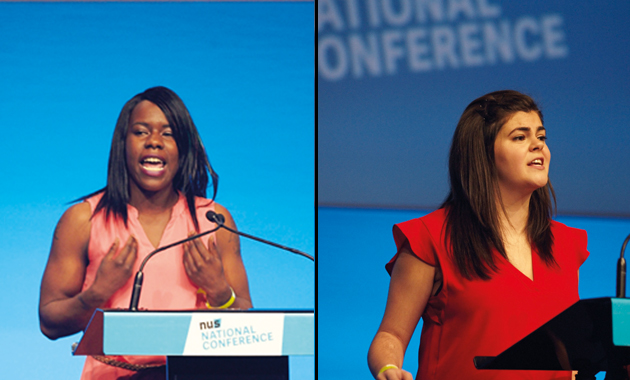 The newly-elected National Union of Students (NUS) vice president for FE Shakira Martin (pictured above left) has told of her hopes to boost the sector’s learner engagement and be an inspiration to minority groups during her tenure.

Ms Martin, who is training to be a teacher, said she wanted more learners from colleges and independent learning providers to become more involved with the NUS.

“Students from FE make up around 4.1m of the 7m NUS membership, but that it is not reflected on the national stage,” she said. “Only around 250 of the 895 delegates at our conference were from FE, which shows why we’re underrepresented.”

She added: “I’m proud to have been elected. The whole reason that I ran for this post was to help push down the barriers for other people from similar backgrounds.

“As a black, working class woman and single mother, I have seen so many talented people from my community who don’t get anywhere because they haven’t got the confidence. If seeing me achieve this inspires all sorts of different minority groups then that would be great.”

Her election came after Megan Dunn (pictured above right), aged 24, the current vice president for higher education, won an earlier election with 413 votes, which was 211 more than rival Beth Redmond, to become the new national president of the NUS. Both winners will take up their full-time, paid sabbatical posts in July. Ms Martin replaces Joe Vinson and Ms Dunn replaces Toni Pearce.

Ms Martin said she planned to work with other sector representative groups to fight FE funding cuts, including 24 per cent to the non-apprenticeship part of the adults skills budget, for 2015/16. “I want to form a broad coalition, with students joining with the Association of Colleges, 157 Group, the Education and Training Foundation and other powerful FE representative bodies to campaign against the cuts,” she said.

“At the moment everyone is just accepting it without a fight, but if we don’t have increased funding then there won’t be an FE sector apart from apprenticeships. I love apprenticeships, they are a great route to employment and I plan to campaign for an increase in the apprenticeship minimum wage, so it isn’t an excuse to some companies for cheap labour, but there is a lot more important training that FE does that is now under threat.”

Ms Dunn said she planned to “build a movement around a vision for apprentices not just with a rise in the minimum wage but with a living wage”. “The end of the false choice between FE and higher education — with the focus on how someone wants to learn and what they want to study rather than what they can afford or what they are told — is worthwhile,” she added.

She said that she was pleased that all three were passed by delegates.

Motion 207 stated that “the government needs to reverse all cuts to FE and instead provide a well publicly-funded FE which is accessible for all”.

It also resolved that the NUS should “campaign nationally to restore all FE funding cut since 2009 and for yearly real terms increases”.

Motion 211 stated that “it doesn’t make sense to fight for free education in higher education but not FE”.

It called for NUS to “campaign for free education funded by taxing the rich for all students in FE and higher education.”

Motion 303a stated that “EMA was a lifeline to thousands of students that, in England, was cruelly scrapped by the government in 2010”.

Payments of up to £30 a-week used to be given through EMA to students from low-income households. The motion called on the NUS to “launch a major national campaign to bring back EMA”.