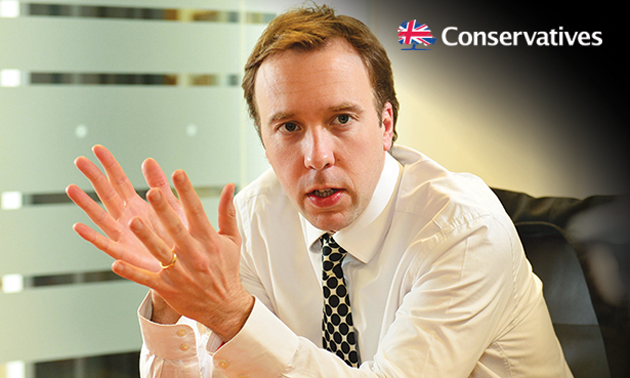 The Conservatives, Labour and the Liberal Democrats have all come in for grilling with a host of questions from FE and skills figures.

In this first of three articles, Business, Enterprise and Energy Minister Matthew Hancock (pictured) takes the stand for the Conservatives.

Will FE be funded at all in the future — if so for what?

Yes, but we’ve made clear that we need to deal with the remaining deficit. That means savings for the next two years at the same pace as in this Parliament across the Government as a whole. We’ve also expanded the funding for apprenticeships even in this Parliament — so while dealing with the deficit, it’s one of the areas of government spending which has expanded, not contracted. And we’ve got a clear commitment to see 3m apprenticeships in the next parliament.

Will colleges be appropriately funded to deliver English and maths?

How do you envisage the provision for learners requiring “second chances” if students have not succeeded in the school system?

Raising the participation age (RPA) had been an important part of the reforms that was seen. We’ll continue with that with the final increase in September at the same time we’ve expanded the ability of FE to provide for 14 to 16-year-olds because often people succeed better in a different environment at that age, and there’ll be continued support for adult education and of course the apprenticeship system which had the biggest impact on lifetime learning.

What would you do to ensure that government-funded training leads directly to a job outcome?

This is a crucial part of the reforms we’ve seen so far, to link more directly the line of sight to work. The Trailblazer process is the most conspicuous and clearest link, but also the review vocational qualifications has brought employers’ needs more closely into the qualification system as a whole and as a I travel round the country and visit colleges I see increasingly colleges engaging with local employers to ensure that what’s taught is what’s needed in the local area.

How will you support the FE Sector to generate more income to replace the 24 per cent reduction in adult skills budgets?

What are you going to do about ensuring independent careers advice?

We’ve made huge steps with the careers company and more engagement with local employers both from the public and private sector in their local schools,

What will you do to overcome the inherent mismatch between young people’s career aspirations and the skills needs of industry?

Information is the most important this, but inspiration is important too. You’ve got to raise expectations and lift people’s eyes to the horizon to what is available locally and making sure that the more engagement you get between employers and young people, the evidence shows the more likely they are to get the job and the more opportunities they know of available locally. So for example we have a shortage of engineers in this country, the evidence on the pay of people who take engineering tend to get paid more than those who don’t  — if you tell that to a young person, you’re likely to get an enthusiastic response.

By how much would you cut the Adult Skills Budget (ASB)?

Well clearly there’s going to have to be a spending review after the election, the ASB is only part of the mix. We’ve got a target of 3m apprentices which will have to be funded and so you’ve got to look at all these budgets in the round. We’ll have the spending review and we’ll settle it then.

What measures will you introduce to improve basic skills in the working age population?

There’s a three-pronged approach needed, the first is on English and maths — increasing opportunities for English and maths is important, the second is on digital skills because digital skills can themselves open up access to online education and so improve digital education opportunities and then the third is apprenticeships, which is available at all ages. And we’re building a ladder right from basic level two apprenticeships all the way through to fully-fledged degree level apprenticeships which are accessible to people from all backgrounds.

How do you think the quality of apprenticeship programmes should be monitored?

This is a very important issue. Firstly, by employers wanting to make sure that their apprentices get the skills they need in the workforce but secondly by making sure that those who are providing the training are of high quality and thirdly the new system of apprenticeship funding will allow a more explicit choice of training provider and I hope that that can lead to encourage higher quality training too.

How are you going to support FE by ensuring that by the time students come to us at 16 they are already equipped with the English and maths they need?

This is critical. And we have a massive education reform programme that’s been going for five years now and we need to keep going in the right direction. There are signs that is working but it takes a whole generation to see young people move through the education system even up to the age of 16, so it’s going to take more time but the focus on more rigour on English and maths in particular in school.

How are you going to make sure that opportunities for adults to change or develop their careers don’t decline due to lack of funding?

A lot of this is about targeting the funding. We’re going to have 3m apprenticeships which can help people who are changing careers and the loans system allows people to invest in themselves. So the opportunities are there, it’s a matter of using all of the tools available — apprenticeships, loans and grant-funded courses to support people.

I think this is an important task. The contribution to the economy should is best measured through the impact they have on peoples wages. The Small Business Act which has just become law will allow us to compare across the board the impact of different courses on people’s earning over time. I think this is a really exciting moment because we will be able to measure which courses have the most impact in an objective and comparable way, so there’s a level playing field between schools, colleges, apprenticeships and university programmes. I also think there’s an important side to linking universities and colleges to ensure that there is more of a vocational element to many university courses so they’re better linked to what businesses need and to make sure that colleges have more opportunities to offer higher education too.  There should be a continuum, not an artificial break in the education system — from the most abstract of academic study through to deeply practical learning on the ground.

What are you going to do to support skills competitions and help continue the great work they do for young people who are involved with them?

We love skills competitions and the Skills Show in particular is very exciting and we wish it every success. They’re great, I certainly want to see them continue. I don’t have a WorldSkills policy in my back pocket but I do have a huge amount of enthusiasm.

What are you going to do to help support young people who have found themselves in difficult situations with the law or unemployment to turn their lives around and get into jobs?

The more support that people in that situation can get the better. As unemployment falls, it allows Jobcentre Pluses (JCPs), for example, to focus more on those who remain unemployed and if you talk to JCPs around the country they’re able to put more into each individual from job centre advisors because there are fewer people unemployed at the more difficult end.

Our troubled families programme has had a huge impact on the lives of 100,000 of the most troubled and difficult families bringing together all of the different agencies, law enforcement and local authorities to try to have a single point of contact rather than leaving people to have to deal with a complicated system. Both of these drives have been positive but there’s clearly more to do because we must support as much as possible and in a way that works those who have found themselves in difficulty.

What effect has raising the school leaving age had on young people not in education, training or employment (Neet)?

The number of Neets is at record lows for 16 to 18-year-olds clearly now that there is a requirement to be in education and training of some kind we can focus more clearly on those who aren’t because there’s no excuse and we can have a more clear intervention because there is a clear legal requirement.

*A number of questions were not posed due to timing constraints