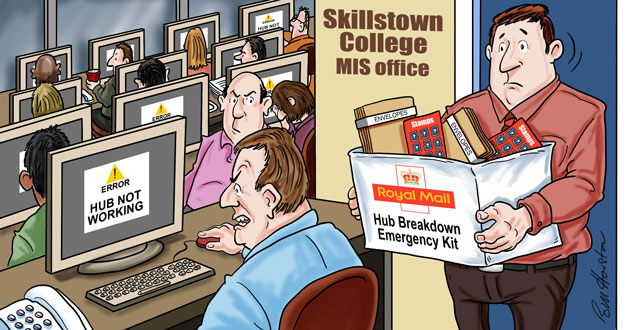 The emergency plan that the Skills Funding Agency (SFA) would set in motion if its online data collection system went into meltdown could require a large box of stamps and plenty of envelopes, FE Week can reveal.

The SFA said in January that it had a ‘contingency plan’ to help providers meet deadlines for individual learning record (ILR) submissions in the event of widespread and prolonged system failure.

And that contingency plan — released to FE Week under the Freedom of Information Act and following repeated breakdowns with the SFA’s online systems — involves a return to more traditional methods of transferring data.

It stated: “In the event of sustained problems with our data collection system, we will assess the impact and consider whether there is a need to introduce a manual method of collecting data from providers.”

An SFA spokesperson said the “manual method” could involve asking providers to send files saved onto discs or memory sticks in the post, through Royal Mail or a private courier.

Another possibility would be sending encrypted messages by email.

An SFA spokesperson said on Wednesday (March 11) that she hoped it would provide users with “future reassurances” after users complained on the FE Connect online forum about repeated problems with the Hub, which fully replaced the old online data collection (OLDC) system in October.

But it failed on January 5, less than 48 hours before the Individualised Learner Record (ILR) R05 (fifth return of the academic year) deadline, following previous breakdowns in August for R12, September for R13 and December for R14.

The contingency plan says “We have service level agreements (SLAs) that underpin our contractual agreements. Where an issue is deemed to be a priority one or two, and those SLAs are breached, a major incident will be declared.”

An SFA spokesperson said priority one situations could include when the “majority of application transactions are failing” or follow “widespread data corruption of critical data”.

Priority two situations scenarios could include where “processing of data failed for a critical deadline due within [the] next two days”.

Stephen Hewitt, funding manager at London’s Morley College, said he was pleased to hear the SFA was planning for worst-case scenarios.

He told FE Week: “There have obviously been problems with data collection recently and it’s hard to believe that there won’t be more again, so it is good to know that the SFA is thinking in terms of a contingency plan.”

An SFA spokesperson said: “Recognising that the data collections processes in the 2013 to 2014 funding year did not run smoothly, we have listened to user feedback to improve our systems and have contingency plans in place as part of our overall business continuity planning.

“We hope this provides our colleges and training organisations with future reassurances for this key system.”