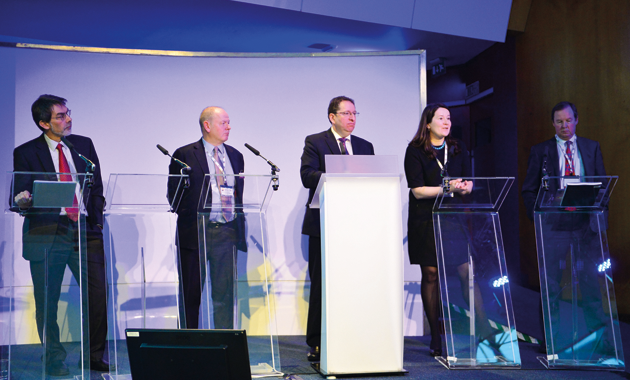 Labour proposals to abolish level two apprenticeships were rejected by Unionlearn at the Association of Employment and Learning Providers (AELP) 2020 Vision conference.

Tom Wilson, director of the education wing of the Trades Union Congress (TUC) told audience members in London’s Congress Centre that plans would be a “grave injustice”.

“We do not think that level two should be abolished,” he said on Thursday (February 19).

“I think that would frankly be a grave injustice to the thousands and thousands of apprentices who’ve currently got level two.

“But the way to do that is not just to abolish at a stroke level two, it’s to work with employers, work with unions, work with the sector bodies and try and create that sense of progression.”

He described his comments as “a plea for a bit more nuancing and a bit more care in how these issues are expressed”.

Stewart Segal, AELP chief executive, also blasted the policy, saying Labour had “got it all wrong”.

“All this talk of higher apprenticeships is great,” he said. “But at the same time they’re talking about getting rid of level two and this has to be a ladder of opportunity and in my view it should start at level two.”

The role of apprenticeship providers in ongoing reform discussions was also hot topic as the conference — aimed at examining the future for learning providers over the next five years — opened.

Mr Segal outlined his key issues with the reforms, which have seen apprenticeship standards redesigned by trailblazer groups of employers, and proposals to route funding through employers rather than providers.

“I’m trying to separate the trailblazer and standard issues from the funding issues,” he said.

“We did need to refresh the frameworks — in fact we’ve been putting off doing it for the last few years because we knew something big was coming.”

He said AELP “absolutely” supported the principals of the 2012 Richard Review of Apprenticeships, which laid the groundwork for the reform proposals.

However, he said: “I want to see employers getting control of funding — but not getting the actual pound notes through their bank account, that’s where we have the issue.”

He went on to acknowledge that government was beginning to pay more attention to training providers’ concerns.

“We’ve made our views clear, we hope that if we can work together with all stake holders with all the sector experts we could find the model that will drive that growth that all the political parties have committed to,” he said.

He was followed by Skills Funding Agency (SFA) director of apprenticeships Sue Husband.

“The apprenticeship reforms are crucial in ensuring that apprenticeships are fit for purpose to support the skills system now and in the future,” she said. “Key to these important changes are making sure that employers are in the driving seat and can shape the competencies required in a successful apprenticeship.”

She added: “The role of training providers is vital for apprenticeships both now and in the future.

“Training providers are expertly placed to step up and influence the future. Your involvement and your voice are crucial.”

The attention turned to Local Enterprise Partnerships in the afternoon with the conference coming just days after the SFA released a document detailing how it planned to increase their influence on skills budgets.

Mr Segal told FE Week this could have a particular impact on his members.

“There are issues for national providers who are delivering locally in multiple Leps. The processes for local links have to take into account that providers and employers often operate across many different Leps,” he said.

“Because of the way that independent training providers are funded by the SFA, ie funded on delivery in response to local employer demand, we are confident that their provision is meeting local economic needs.”

And in a panel discussion at the close of the conference, Mr Segal warned against an overemphasis on localism.

“When you’re looking at a core programme like apprenticeships, traineeships, work programmes, they should have some standardisation so everybody knows where they stand, and then if locally that group of organisation can enhance and improve that position then that’s great. “If it doesn’t look like it’s going right, those national programmes should be challenged by those local organisations, but it’s not about having your own one — we’ve all come from a time when we were involved in Training Enterprise Councils and we had 74 different systems, I don’t think we want to go back to that.”

South East Midlands Lep (Semlep) chief executive Daniel Mouawad said: “We don’t want to be controlling the funds but we certainly want to ensure that we bring the right influence on where the funding goes to ensure that we close the skills gap that is clearly opening up in our labour market.”

Peter Lauener, chief executive of the SFA, sought to reassure providers about the document.

“The main mediation needs to happen between colleges, providers and Leps without SFA getting in the way,” he said.

“The document is about a direction of travel and trying to establish the importance of the Lep relationship, about trying to clarify rules and responsibilities.

“I don’t think people should read into it too much as a definitive fully mapped system, but the devolution agenda is important, its powerful, it’s not going to
go away.”

Throughout the conference delegates had the chance to vote on the issues being discussed. Here’s how the voting went:

Question: How concerned are you about the trailblazer process?

Question: How do we increase the number of traineeships?

Answers: a greater commitment from local job centres to make referrals — 23 per cent, allow all providers access to the programme —18 per cent, improve careers advice offered to young people — 50 per cent, and simplify the contracting process — 9 per cent.

Question: What role should Leps perform?

Answers: improving labour market information — 58 per cent, co-ordinating delivery on the ground — 14 per cent, direct contracts with a Lep — 6 per cent, influencing and monitoring national contracting — 22 per cent.

Conference-goers have their say

FE Week reporters Rebecca Cooney and Sophie Scott hit the AELP conference floor to meet delegates. They asked them (Q1.) what would you like to see all political parties include in their manifestos for the general election? They also asked (Q2.) what is it important for providers to be doing to ensure their survival to 2020 and beyond?