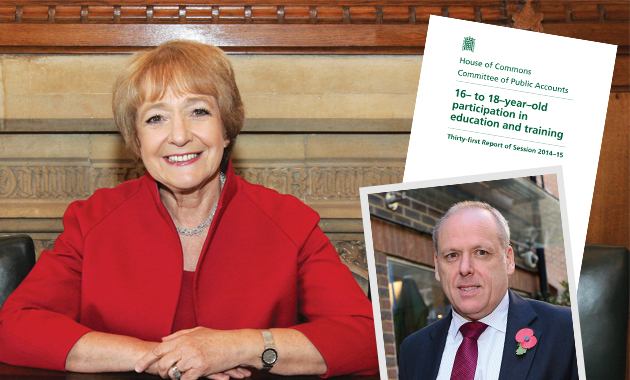 Public Accounts Committee chair Margaret Hodge (pictured) has warned that the Department for Education (DfE) has “little understanding of the impact of existing initiatives and programmes” for 16 to 18-year-olds.

She spoke out with her committee today reporting on its three-month inquiry into participation in education and training among the age group.

The report warned that the DfE had no plans to replace the Youth Contract scheme, which supports the hardest to reach young people, when it ends next year, while Martin Doel (pictured inset), Association of Colleges chief executive, warned the DfE could not “carry on ‘hoping for the best’ without updating its policies and funding”.

The committee report put forward six recommendations, including a DfE evaluation of the “relative effectiveness” of its initiatives and a setting out by DfE of how young people will be helped after the end of the Youth Contract.

“With scarce resources it is vital to understand whether and which initiatives are most effective and why. Yet, the DfE has little understanding of the impact of existing initiatives and programmes.”

The committee found that although the proportion of young people not in employment, education or training (Neet) was at its lowest since records began, 148,000 were still Neet at the end of 2013.

“While the number [of young people who are Neet] is thankfully improving, the UK is still behind other Organisation for Economic Co-operation and Development countries when it comes to reducing Neets,” said Ms hodge.

“It would seem common sense that the main reason the number of Neets is down is that the law has changed to require young people to continue in education or training until at least their 18th birthday.

“It is difficult to show that any other interventions, such as careers advice, have been effective.”

Mr Doel said: “The DfE cannot carry on ‘hoping for the best’ without updating its policies and funding to take account of this major change,” he said.

“We know that young people are too often being held back, not only by a significant reduction in funding for 16 to 18-year olds, but by policies that are not fit for purpose – particularly around careers guidance and transport.”

He called on the next government to conduct a “once in a generation review” of how money is spent in each year of compulsory education, pointing out that spending on 16 to 17-year-olds was currently 22 per cent lower than for 11 to 16-year-olds.

The 15-page report also warned that careers advice was “patchy” and called for DfE to explain the steps it would take when a school was shown to be offering poor careers advice.

“Raising the Participation Age offers us an opportunity to reduce the Neet figures further if young people are aware of the opportunities that traineeships and apprenticeships offer and that’s why the PAC is right to highlight that careers advice in schools is a real issue which needs to be tackled properly,” he said.

He called for an “effective communications campaign” to ensure the raised participation age was properly understood and young people were aware of their options.

Joe Vinson, NUS Vice President for FE, said: “This report confirms what we have been saying all along with regards to careers advice. One of the biggest decisions a young person will ever make is choosing the right path to take so they can achieve the career they want, but for many young people they are left to navigate the complicated world of qualifications, providers, further study or work options either alone or with minimal support.

“The current guidance is disparate and patchy from town to town, with many having to rely on a ‘one size fits all’ website or outdated, and sometimes biased, advice from parents and teachers. It’s clear that the system needs a radical overhaul.

“This report also confirms that travel is a major issue for students. Sometimes it can be the difference between making it to college or not, particularly for students from lower income backgrounds and those living in rural areas. Further cuts to these services could worryingly see a whole generation of people being unable to get to college.”

The report echoed the government’s response to the technical consultation on apprenticeship funding reform, published last week, which concluded that the proposed funding mechanisms designed to put employers in control of apprenticeships were in danger of putting off smaller businesses from taking on apprentices.

Lynne Sedgmore, 157 Group executive director, said: “The conclusions of this report seem most strikingly to indicate that time and more research are needed to assess the impact of recent reforms.”

She also called on policymakers to “heed colleges’ calls for a period of stability” in policy.

“These need to be targeted regionally as there seems to be a bigger issue in some parts of the country than others and, of course, in areas with higher unemployment.”

A DfE spokesperson said: “Ensuring young people leave school or college prepared for life in modern Britain is a key part of our plan for education.

“That is why we are doing more to enable young people to access high quality advice and opportunities that will enable them to make informed decisions, in particular through the creation of the new careers and enterprise company.

“The new company will encourage greater collaboration between employers and schools, helping them access a wealth of experience to inspire young people across the country about the possibilities of the world of work.”

She added: “Our plan for education means thousands more students are staying in education or training after the age of 16, giving them the skills and experience they need for life in modern Britain.

“We have ended the historic and unfair funding difference between post-16 schools and colleges by funding them per student, rather than discriminating between qualifications – this ensures young people are studying high quality courses that will help them get on in their lives.

“The funding is sufficient for each full-time student to undertake a full timetable of courses to suit their needs, be it A-levels or other post-16 qualifications. It is for individual institutions to decide on what they provide to best suit the needs of their students.”