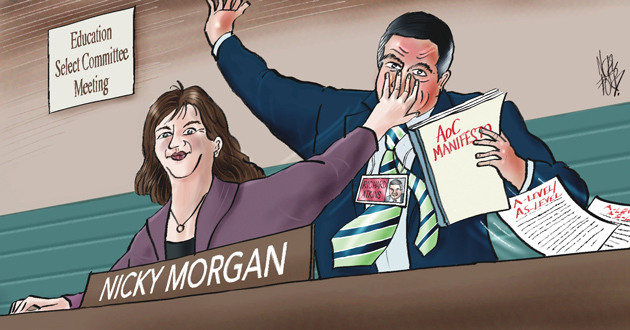 Addressing MPs on the House of Commons Education Select Committee looking at exams for 15 to 19-year-olds in England on Wednesday (December 3), Ms Morgan (pictured front) defended plans to turn AS results into a separate qualification, making A-levels into a two-year course culminating in a single qualification.

Committee member Alex Cunningham asked Ms Morgan if she would reconsider the policy in light of the AoC manifesto, unveiled at its annual conference last month by president and Exeter College principal Richard Atkins (pictured).

The manifesto had called for the next government to “maintain AS-levels in their current form and should allow for rigorous modular assessment in vocational and academic qualifications, alongside final exams”.

However, Ms Morgan told the committee she would not consider reversing the decision to split the qualifications.

“We have retained AS-levels — they have just been de-coupled from A-levels,” she said.

“I’m a fan of linear assessment, in terms having the time to study something properly, without the stress of continuous assessment.” She acknowledged that in more practical courses some modular courses might be “absolutely necessary” but that in other courses “it is right to be assessed at the end of the course”.

Committee chair Graham Stuart and Mr Cunningham said they had heard “near-unanimous” opposition to splitting AS and A-levels from across the education sector.

They also pointed to evidence from colleges that requiring AS-levels to run alongside A-levels risked excluding students in disadvantaged areas.

However, Ms Morgan said: “I’m not sure I buy this argument about people being socially less able to do A-levels, this is part of our drive to raise the standards in education for all pupils.”

Mr Cunningham said: “Colleges tell us in many cases they can’t afford to teach both of them at the same time.”

The Education Secretary said this did not match up with the Department for Education’s “evidence and research”.

“We obviously listen to colleges and what they’re saying, but we are now funding colleges on a per student basis, with enough funding for 600 hours of teaching which should be enough to teach three linear A-levels and an AS-level, as well as a 150 hours for tutorial time, so we don’t think that’s an issue,” she said.

A consultation on GCSE and A-level reform ran from September 25 to November 20, although a response has not yet been published.

There is also an open consultation on the reforms in relation to religious studies, which closes on December 29.

Ms Morgan also defended the decision not to specifically include employers in the design of the new A-levels and GCSEs in the same way they have been consulted over apprenticeship reform, saying apprenticeships were “particularly employer-focussed”.

The committee has previously heard evidence from Ofqual as well as calling for written submissions from the education sector.