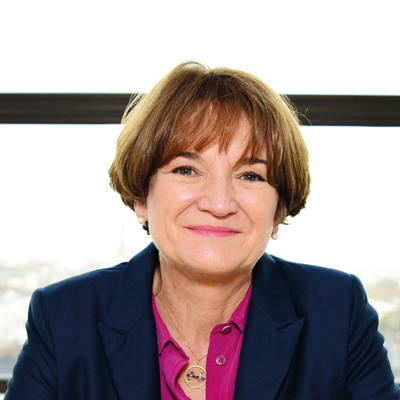 In the office of Carole Stott’s mentor and university lecturer Gerard Boynton, there was a sign hanging up that read: “All we need to make us really happy is something to be enthusiastic about.”

It is a motto that Stott, now chair of Skills Show organisers Find a Future, director and chair of the Association of Colleges (AoC) board and chair of governors at City of Bath College, says she’s seen reflected in her own career.

“I want to do things that make a difference, that are worthwhile. You want to do something that rocks your boat,” she tells me as we sit down in Find a Future’s offices, overlooking the rooftops of Victoria.

And her enthusiasm for her various roles in the skills sector is obvious — her eyes light up as she looks forward to the Skills Show this week (which will also see Stott’s 63rd birthday).

She originally trained as an English teacher, partly inspired by being asked by her own teachers to explain concepts to the class.

“I love that feeling — when you feel you’ve grasped something and understood it,” she says.

“There’s nothing better in education than actually understanding — that’s what it’s all about, the joy of understanding.”

At home, in Bury, then part of Lancashire, she says, the three most important things were “hard work, education, family” — her parents, Kathleen and Jack, who had both left school at 14, “suffered from their lack of education”. “I came from a very working class background,” she says.

“I didn’t know it at the time, but looking back, we were quite poor — but my parents were very respectable, and that was really important to them.”

Both Stott and older brother Ken, her only sibling, passed the 11-plus and went to grammar school, something Stott says her parents saw as part of “the route to a better life”.

Despite this, Stott has no nostalgia for the grammar school system. “I might have just sunk at a secondary modern, but I think if there had been comprehensives, then I think I’d have probably done just as well,” she says.

“People sometimes see grammar schools as the only solution to social mobility and I just don’t believe that — I think bright kids in a good comprehensive can do just as well.

“I hate the idea that it’s decided at the age of 11 that you’re not very bright and you’re going to be classified like that.”

Stott left Bury at 18 to study English and drama teaching at St Mary’s in Twickenham and her final teaching training placement at a girls’ school in Surrey led to a job. She married shortly after leaving university and spent the next few years moving from London to Bristol, to Devon, to Coventry.

Unfortunately, she says, “there was suddenly a dearth of jobs and an oversupply of teachers.”

As a result, Stott spent seven years looking after her two small children, Laura, born 1979, and James, born in 1982, and supply teaching, until an offhand comment led her to FE.

“In Devon, our next door neighbour was a head of department at a local FE college and he said to me: ‘You ought to think about teaching in further education, I think you’d like it’,” she says.

After four years there, Stott noticed Warwick University was offering part-time degrees for FE lecturers and although it was only supposed to be for full-time lecturers, Stott says she “pestered them until they said yes”.

Stott describes the experience as “transformational”. “I enjoyed lecturing but that got me really interested in policy and curriculum and all of those issues,” she says.

“It made me realise you do stuff in the classroom but then the people who are making the policy are the ones who actually influence what you can and can’t do as a teacher,” she said.

Stott came to FE without any specific FE qualifications, and was in the minority as a qualified teacher — but she remains ambivalent about the issue.

“I think it’s good for people to aim to be qualified,” she says.

On finishing a degree she was faced with a choice between a secure, full-time lecturing or a project-funded policy job at the National Institute of Adult Continuing Education (Niace).

After the funding dried up, Stott found herself interviewing for a job setting up the Central Access Network — the day after The Further and Higher Education Bill 1992 was published, proposing to turn colleges into corporations.

“I read this bill and thought: ‘well, the local authority isn’t going to want to fund this.’ The only way this is going to work is if we get the colleges to take ownership of this,” she says.

“And it was great — it was a really good model where we got all the colleges, the two universities and the local authority to work together.”

The job also provided Stott with some valuable learning experiences.

“I made some terrible mistakes,” she says.

“It makes me blush now to think about — I’d never had any budgetary responsibility and I completely forgot about cash flow, so of course we ran out of money.

“And when I had to tell my board, I was terrified but they were great — they just said ‘you’ll learn,’ and made sure I got a bit of support. “They taught me about governance and it was a lesson well-learned.”

Since those early days of incorporation, she’s seen the focus governance change, and she tells me, “that‘s no bad thing”.

When Stott was interviewed for the role as chair of governors at City Lit in 1999, she asked to be put on the quality assurance board — only to be told there wasn’t one.

“In those days it was less concerned about quality — the emphasis was on the financial management,” she says.

“That was a reaction to the times and to incorporation and suddenly being responsible for their own budgets.

“Now, I think we’ve shifted that balance, quite rightly, so the money’s there to support the quality, not the other way around.”

Stott moved on to work first for the London Open College Network (commuting back to Warwick) and then the national one, before founding a consultancy — which brought with it the choice of living anywhere for the first time.

So she settled in Bath, where she met her now-husband, Steve, who is also in education, focussing on teaching maths to those with learning difficulties.

In 2012, Stott was awarded an MBE for her services to FE.

“It was the proudest moment of my life,” she says.

“Not the MBE itself — my children wrote me a card saying ‘we’re so proud of you mum’ and I just thought that was wonderful.” Stott graduating from her B. Phil Ed from Warwick in 1991

Looking to the future, the most important task for AoC and Find a Future, she says, is about creating “a culture shift”.

“I think politicians absolutely have to understand the importance of colleges and that if you undermine that infrastructure of colleges, then you’re actually undermining the future of the country,” she says.

“And for AoC it’s about constantly, constantly getting the message across, making sure that politicians and officials understand the consequences of their policies.”

And Stott shows no sign of backing off her many commitments, still living by her lecturer’s motto.

“If you’ve got something you’re enthusiastic about, that you really care about, then you’re proactive, then you do it,” she says.

“And I just think I’m very fortunate really to have been able to do things that I think are worthwhile and that I care about.

“Not everybody has that chance, do they?”

Middlemarch by George Eliot — no question. It absolutely has been ever since I first read it when I was about 18. I think Dorothea is a wonderful heroine. She’s very strong, intelligent, humane and loyal, so she’s a brilliant heroine, and at a time when people didn’t write about strong women
like that

Broken promises. It really irritates me if people say they are going to do something and then they don’t. I also hate it when you hear about teachers humiliating kids — kids feeling humiliated, being told they’re thick

Friends and family are the most important things. I also belong to a book club, so reading. And I love live music. And also travelling, when I get the chance

George Eliot and Charles Dickens, as they were both kind of social reformers and I thought probably Desmond Tutu. You would get great conversation with those three. Oh, and [City of Bath College principal] Matt Atkinson said I should say him as well — because he’d enjoy the conversation too

First of all I wanted to be a vet, that was my first dream job, just because I liked animals really, but then I couldn’t do that because I was too squeamish. And I wanted to be a teacher from early on, but then if I’m perfectly honest, I wasn’t aware of many other options. As a little girl in the 1950s and 60s, it was: ‘Do you want to be a teacher or a librarian or a nurse?’