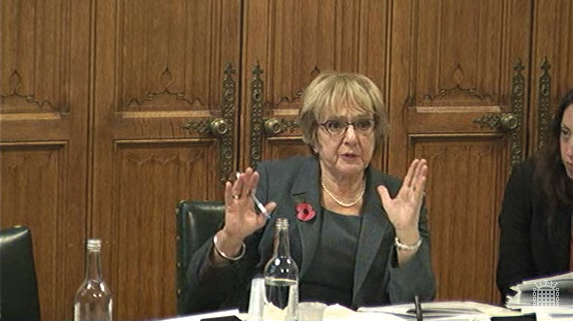 Participation in education, employment and training among 16, 17 and 18-year-olds will not improve unless the government tackles problems with young people slipping through the net, a senior MP has warned.

During a hearing of the Public Accounts Committee’s inquiry into 16 to 18 participation, chair Margaret Hodge (pictured) warned Department for Education (DfE) Permanent Secretary Chris Wormald that the government had to deal with the issue of young people classified as “unknown”.

MPs grilled Mr Wormald over a National Audit Office (NAO) report entitled 16 to 18-year old participation in education and training, which showed a big disparity between local authority areas in the percentage of young people for whom the government had no information about their status.

Ms Hodge said: “If you’re going to get on top of Neets you’ve got to know. If you don’t even know where they are you’re never going to be able to find anything.”

Mr Wormald was given examples of the disparity. For example, in the London boroughs of Barking and Dagenham and Hackney, the figure was 19.8 per cent, but in nearby Thurrock, it was 0.3 per cent.

Daventry MP Chris Heaton-Harris said: “I was quite surprised to see the massive variation in those figures by local authority area, and I was just wondering if you can explain that for me.

“Is there any reason to suppose that the information is being captured inaccurately by the local authorities concerned? It is surprising that you have similar authorities in adjacent geographical locations with such dissimilar figures.”

Mr Wormald replied: “It’s possible, but I’m not going to comment on individual authorities without having discussed it with them.

“The figures you are giving me are intrinsically surprising, and I don’t off the top of my head see an obvious explanation. I’m quite happy to look at those cases and come back to you.”

Speaking about careers advice, Mr Wormald promised action from Education Secretary Nicky Morgan, but he was warned by Ms Hodge about contradicting evidence, after he claimed that “the vast majority of schools want to do well for their pupils”.

Ms Hodge said that Ofsted’s annual report showed that “one-in-four young people would have made a different choice if they had known about the options they had before them”, adding: “You’ve got a problem here”.

She said: “If you honestly say to us ‘we can’t do more because we haven’t got the money and we’ve decided to cut this’ I could buy that because I know the difficulty of getting a decent careers service going. But to pretend that schools do it well when the bulk of the evidence is against you is a bit difficult.”

A spokesperson for the Association of Colleges (AoC) said: “AoC has always supported raising the participation age to 18, but we need to ensure the funding, careers advice and transport is in place so all students can access excellent education.

“It was good to see the MPs on the committee seeking to hold government to account and raise the variable performance of local councils in knowing whether 16 and 17-year-olds are actually in education or training.”

Dr Mary Bousted, general secretary of the Association of Teachers and Lecturers (ATL), said: “When so many young people are still out of work, the government needs to do much more to ensure that students everywhere, whether in school or college, have access to high quality, independent, face-to-face careers information, advice and guidance.”

Mr Wormald is due to appear in front of the committee again on November 17.