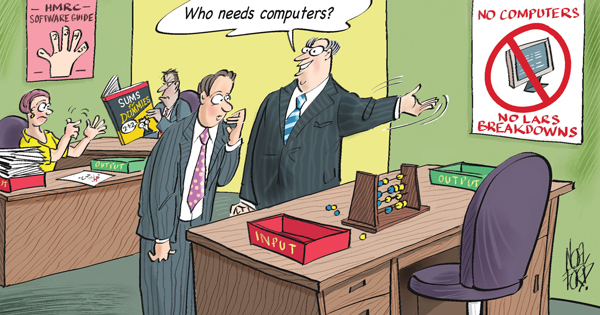 Computer skills are “not relevant” for tax apprentices enrolling on a new framework at Her Majesty’s Revenue and Customs (HMRC), FE Week can reveal.

Learners on the HMRC’s level three programme do not have to learn ICT skills as part of the “transferable skills” section of the programme.

A spokesperson for HMRC said it had an “entire division of highly skilled IT staff” with “separate development programmes”.

He added: “HMRC requires a vast array of skills to ensure the tax system continues to evolve and operate to meet the needs of our customers.

“While ICT is an essential and greatly valued skill for all roles at HMRC, the tax apprenticeship is specifically tailored to policy work where certain skills are essential to do the job.”

But the lack of transferable ICT skills in the framework has been criticised by the National Institute of Adult Continuing Education (Niace), with chief executive David Hughes warning apprentices might not be getting the most out of the course.

He said: “It is inconceivable that any apprenticeship should not have a good dose of IT skills as part of the programme. An apprenticeship shouldn’t be just about the current job, but should equip each apprentice with the skills they need to guarantee they have a sustainable and fulfilling career.

“To achieve that, we know that digital skills are as essential now as good English and maths. As technology progresses this will only increase. By next year it is estimated that 90 per cent of jobs in the EU will need at least basic computer skills. However around half of adults don’t have them and almost two-thirds of employers (62 per cent) have concerns about the level of IT skills in their workforce.

“So I am surprised that the apprenticeship in ‘tax’ does not recognise this and am concerned that the apprentices are not getting the full and expansive experience in their training to equip them for a career which might span several jobs, different sectors and un-knowable technological change.”

The tax framework was submitted to the Skills Funding Agency by HMRC two days before the August 31 cut-off for schemes not run through the Trailblazer programme.

The HMRC argued the new framework provided “a structured approach to training and developing prospective tax specialists who understand the needs of the organisation,” and was developed “to create a new vocational pathway in tax to attract, develop and retain talent for the future and to professionalise the roles for HMRC”.

The department claims the framework was relevant for tax caseworkers, support risk-based quality compliance checks into businesses, employers and individuals, and for tax/policy specialists, who draft guidance for HMRC and external customers of the department.

A spokesperson for the Department for Business, Innovation and Skills said: “ICT qualifications may be included in an apprenticeship framework or standard, where the developer believes they are necessary for the job. Qualifications in ICT are not a mandatory part of all apprenticeships.”