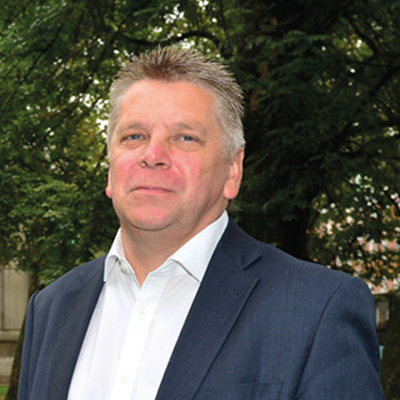 “I remain convinced that anyone’s career is based on luck,” says Paul Warner, director of employment and skills at the Association of Employment and Learning Providers (AELP).

“You don’t realise how momentous a decision can be at any point until years later you go, ‘What if I’d made another choice? What would have happened?’

“So none of this was planned.”

As a teenager, Warner’s ambition in life was to become a fighter pilot following in the footsteps of his father, Len, who had been conscripted in the Second World War.

“He’s not sure if he was unlucky or not,” Warner tells me.

“He was in training to fly bombers, and then just before he was going to go on his first mission, the war ended, so he was a bit annoyed.”

Instead, Len went into business, running a timber company near the New Forest, where Warner grew up. But the flying experience left a mark on his son, born 20 years after the war ended.

“He just used to tell me about it and I just always thought I wanted to be in the air force,” says 50-year-old Warner.

“I absolutely loved planes, so I thought it would be great.”

His other major ambition, he says, was to be “mega rock star”. He currently has a fully functioning recording studio in his house. Warner in his older brother’s school uniform, aged 4, in 1969

His musical inspiration is Gary Numan, who he’s seen perform more than 60 times and one of his proudest moments as a parent to 12-year-old Alex, he says, was when she asked to come with him to a Numan gig.

“I thought ‘my work here is done, I’ve brought her around to my way of thinking’,” he says.

Although he writes and records “whatever I can come out with,” Warner’s own musical career was scuppered by his flying ambitions.

“I was in a band as a teenager, during the big New Romantic phase in the early 1980s, so we decided we were going to blend being Ultravox with The Stranglers, you can imagine how wonderful that was,” he says.

However, Warner “took a bit of a left-turn at the traffic lights” while studying international relations at Keele University.

“I met quite a lot of people who were in the forces there and it’s more than just flying planes, it’s a lifestyle, and I don’t think that lifestyle was for me,” he says.

He finished university with a first class degree, and “no-one was more surprised than me,” he says. “Fortunately, on the day of my finals, there was a coup in Fiji. The finals were in the afternoon, so in the morning I spent the whole morning reading up on it so by the exam I knew all about it and it was very topical.”

After university, Warner admits he had “a big sort of gap, where I didn’t quite know what I was going to do”.

However, the pressure was on by that point, because while at university, Warner had started going out with a trainee teacher named Claire and, he says “it became blindingly obvious that I had met the love of my life”.

Having married, the couple moved in search of more teaching opportunities for Claire.

“I was doing alright in Birmingham. I was a top performer in Oxford, but I got to London and crashed and burned — I completely lost my mojo and couldn’t sell a thing,” he says.

Fortunately, he bumped into a former colleague who had moved to a company helping unemployed people into work.

“I thought, ‘That sounds interesting’, I didn’t even know companies like that existed. So, speculatively, I sent in a letter to TBG Learning and they took me on,” he says. For Warner, one of the best aspects of his new role, he says, was realising, “actually,
these people need me”.

He remained at the company for nine years, leaving as the business development director in 2002 and after a “brief stint” running work-based learning at Barking College, joined AELP, or Alp, as it was then known.

“I was lucky enough to be at the end of the sort of fluffy days when there was lots of money floating about and nobody seemed to take a great deal of notice of what’s going on,” he says.

“The whole sector has been getting tougher, more commercial, more… ruthless? More clinical, for years it’s been going in that direction.

“I think it’s really good that we’ve increasingly seen less emphasis given to the type of institution that is delivering, so independents have a far bigger portfolio of things they can deliver.

“The trade-off is, if you don’t deliver, you go out of business.”

Independents have a far bigger portfolio of things they can deliver. The trade-off is, if you don’t deliver, you go out
of business

And in the current climate of budget cuts and reforms, he says, the role of AELP becomes more valuable.

“Stakes are quite high, particularly for independents, because their livelihood depends on whether or not they get it right,” says Warner.

“And that’s very worrying for them, so it’s nice to be a part of an organisation that can give a bit of an umbrella.

“Our membership’s increasing quite a lot, quite steadily, at the moment, and I’m pretty certain that it’s because it’s getting tougher. They need information, they want reassurance, and they need to know they’re not on their own.”

However, while the future may not be completely “rosy” he says, “it’s not necessarily a disaster” either.

“It is a very difficult situation and it’s an increasingly small tightrope to walk along,” he says.

“But as long as we keep moving towards a level playing field of funding being available for quality delivery, it doesn’t matter what type of institution, just are you any good at it. Is what you’re doing worthwhile? Is it achieving some objectives?

“There’s still a bit of a way to go at the moment bit if we can really get to that, the skills system will be in a pretty good place.” Usually whatever I’m reading at the moment. Right now it’s The Nazis: A Warning From History, by Laurence Rees

How do you switch off from work?

Music, both playing and listening. I listen to a lot of squawky electronic music I write whatever I can come out with and it’s only for my own benefit, though I do inflict it on my wife and daughter

Eddie Izzard, Graham Norton and Brian Cox. I think that would be really intelligent and very, very funny. I’ll get my wife to cook because she’s very good at that

I really hate lazy English. I hate people who say things like, “Do you know what I mean?” or, “And stuff.” No, I don’t know what you mean. That’s the whole point of you talking to me — you’re supposed to tell me. Lazy English just offends me because there’s no need for it