The massive hall of the Grand Palais in Lille where the skills competitions take place feels like a cross between an workshop, a zoo and a stage set, with temporary restaurants, florists, shop windows and half decorating walls, all open to the pubic gaze.

It’s noisy, it’s busy and its crowded, and at the centre of it all, the competitors remain impressively oblivious to it all, concentrating entirely on their work.

Still, opening day of your first international level competition must be a nerve-racking experience.

After weeks and months of trainers and coaches supporting you every step of the way, the moment when you suddenly find yourself alone in an arena, faced only with the tools of your trade and a tough specification must be difficult to prepare yourself for.

But it’s how competitors handle that moment, and the one after that, which team UK selectors and training managers will have been looking at yesterday.

I know I keep saying it, but these young people are incredibly skilled – and not just in terms of their practical ability.

The trainers prowling around competition areas won’t just be looking for who has the best technical skills, they’ll also have been keeping an eye out for who is coping with the pressure – who realises they’ve made a mistake, stays calm and corrects it, and who just crumbles?

After the first day of competitions the mood among competitors is mixed.

John Peerless and Calum Knott, the mechatronics team, have been told they’ve scored highly for the day and despite facing her two worst test areas, beauty therapist Rianne Chester was confident that she’s finished the day towards the top of the table.

The visual merchandising team were less jubilant – after a shaky start, Jasmine Field told me, they pulled it back, only to realise they’d missed a crucial detail at the last minute.

Team-mate Catherine Abbott said:  “We’re a bit disappointed, it didn’t go as well as it could have done. We weren’t on form and it just slowed down the whole day.”

But, despite the setback, the two were looking on the bright side and clearly know better than to let it throw them completely off balance.

“We’ve still got two days of competition so we can get it back,” said Catherine. Jasmine agreed. “We’ve still got still 70 per cent of marks to get back even if we do lose a couple today,” she said.

According to mechnical engineering computer-aided design competitor Andrew Beel the attitude they’re able to have to mishaps and move on is all down to the training and support.

A fault in the machinery he was working with created problems for him during the day.

“I ended up stepping back, chilling out a wee bit and coming back to it,” he said. “Since I’ve been involved with WorldSkills, my maturity has increased so much – I wouldn’t have handled today like that at all before. I’d have thrown my keyboard off the table and walked out.”

However yesterday went, all the competitors are putting it to one side and approaching today as a whole new challenge – which, given the circumstances, is a pretty impressive skill in itself.

But, as Catherine and Jasmine made clear, there’s still everything to play for. 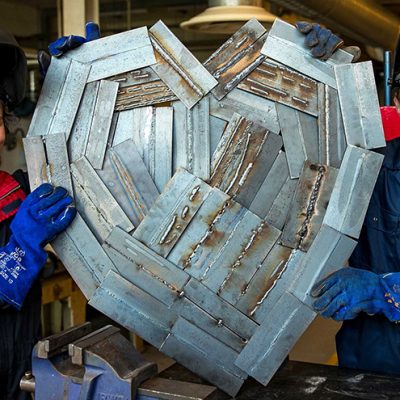