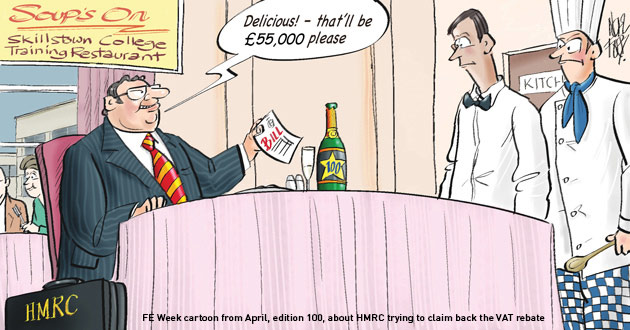 Hopes of a multi-million pound VAT rebate for principals have been boosted by a Hampshire college’s second legal win against the taxman over a training restaurant — but a third courtroom battle is on the cards, FE Week can reveal.

Brockenhurst College was awarded around £55,000 in February after it was found the supplies for its on-site training restaurant, MJ’s, were integral to educating students — and so should have been exempt from VAT.

Her Majesty’s Revenue and Customs (HMRC) appealed against the ruling (see cartoon, right) — with the figure representing a refund of four years’ worth of tax payments on supplies to the 50-seater training restaurant staffed by students and open to the public — but lost.

The defeat for the taxman has prompted calls for principals to get their claims for cash in now with a four-year time limit to refunds, before HMRC lawyers take up the case for third time, at the Court of Appeal in five months.

Brockenhurst College principal Di Roberts (pictured) has said she planned to plough the windfall back into the college, but she declined to comment on the latest development.

With more than 160 colleges in England operating similar facilities, plus other training enterprises such as hair salons, spas and theatres, successful payback campaigns in the vein of Brockenhurst’s could therefore net the college sector tens of millions of pounds.

Ruth Corkin, an accountant with James Cowper, which represents several colleges, said: “There is a four-year time limit in which colleges can make their claim, and, for instance, if HMRC loses at the Court of Appeal and decide to take it further, for example, to the European Courts, it could be a number of years before it is finally settled.

“Providers should be making claims for the last four years now and then making top up claims until the matter is resolved.”

He said: “In the independent sector every company has a different structure in terms of how VAT laws apply to them ranging from large PLCs where there may a group structure to small charities.

“As a result, it is very difficult to know what the impact of any changes to the interpretation of VAT laws would be.

“In this specific case, independent learning providers do not tend to run training facilities that sell their services as they are more likely to place trainees with employers, but there may be some specific cases where this will have an impact.”

HMRC said it was appealing again having lost, but admitted it would have to consider refunds for colleges “in the same position” as Brockenhurst.

A spokesperson for HMRC said: “We have appealed the decision of the upper tribunal to the Court of Appeal. The court has listed the case to start on February 16, 2015.”

They added: “As the matter is under appeal, HMRC will also issue assessments in such cases to protect their position if ultimately HMRC is successful in the litigation.

“HMRC will issue a revenue and customs brief to explain how any colleges in an identical position can make claims as well as provide further guidance.”